The PB and J Sketchprov Show in Toronto Nov 18

on November 10, 2010
From Team Awesome, the people who brought us last summer's Life is Horrible comes a new Sketchprov Show:

The PB and J Sketchprov Show
Inaugural monthly show at the Bread & Circus Theatre (Kensington Market, Toronto, ON) on Nov. 18th at 8pm.

Synopsis:
Here it comes! It’s the new show from the awesomely adorable comedy troupe PB and J, going up the third 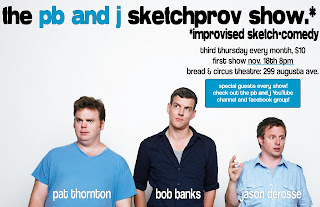 Thursday of every month at the Bread & Circus Theatre in Toronto, ON. PB and J will perform their new and almost-patented form of comedic improv called “sketchprov” (Improv with the structure and high-joke ratio of sketches!). Plus special guests!

PB and J is a trio of some of the hottest and established performers in the Canadian Comedy Scene, such as Pat Thornton (creator/star/head writer of the Comedy Network series Hotbox and founding member/former head writer of the Sketchersons’ Sunday Night Live), Bob Banks (from the improv juggernauts Big In Japan and Mantown!) and Jason DeRosse (from The Second City Touring Company and well as Mantown!, the sketch troupe Maybe and also Hotbox).