At a very young age, Malage fell in love with Music and decided to make it a career. In 1980-1982  he performed with Afrisa International together with Tabu Ley and Mimi. He had a brief stint with Abeti Masikini from 1982-1984.

In 1985, he caught the eye of the maestro. His highness Franco Luambo Luanzo Makiadi. Actually he caught Franco's eye much earlier but he performed with the master and TPOK Jazz between 1985 and 1989. After Franco's death, Malage teamed up with Nyoka Longo and the famous and timeless Congolaise band Zaiko Langa Langa. He worked with Zaiko  between 1989 and 1995.

In late 1995, Malage decided to go Solo and made two Albums, Abulungani and Apocalypse. 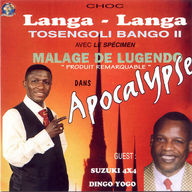 He has always been a big Vocalist in Congolese circles. He often gets called upon by big stars like Madilu System and Josky Kiambukta when they need that sweet voice for a studio production. He also appears in several Live gigs with some of soukous's best like Kanda Bongoman. He just performed with Soukous stars at SOB's in New York not too long ago.

Malage is one of the bright spots left in the Rumba/Cavacha/Soukous circles. A stud student of Franco's popular style. He may be one of the few hopes we have left to revive the beautiful sounds that once dominated East, Central and Southern Africa in the 70's and 80's. We can always dream.....

Check him out in an acoustic song with TP OK JAZZ CAREER here: