on November 28, 2010
From a media release & other material. The film is said to be currently in post production, scheduled for general release on March 18, 2011, but here's an advance look at The Lincoln Lawyer, based on the novel by Michael Connelly

Mickey Haller is a Los Angeles criminal defense attorney who operates out of the back of his Lincoln sedan. Haller has spent most of his career defending garden-variety criminals, until he lands the case of his career: defending Louis Roulet, a Beverly Hills playboy accused of rape and attempted murder. 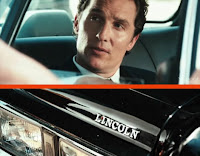 But the seemingly straightforward case suddenly develops into a deadly game of survival for Haller when his client turns out to be much more than the spoiled rich boy that he first appears.

The story was inspired by Michael Connelly's real life meeting with a back seat lawyer.