The Art of Time Ensemble
Shakespeare: If Music Be...
An evening of music, dance and ideas inspired by Shakespeare
December 9 - 11 at Harbourfront Centre

The Art of Time Ensemble brings together some of the most talented artists in the country for Shakespeare: If Music Be...: an evening of music, dance and theatre celebrating the Bard with Kevin Fox (singer/cello), 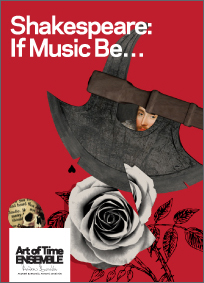 Highlighting several of Shakespeare's most famous scenes, along with dance and music inspired by them, the acclaimed Art of Time Ensemble presents Shakespeare: If Music Be... a sumptuous multi-disciplinary ode to the greatest English-language playwright ever to put pen to paper. Artistic Director Andrew Burashko brings together some of Canada's most outstanding artistic talents for this one-of-a-kind event that runs Thursday December 9 - Saturday December 11 at 8 pm at Harbourfront Centre's Enwave Theatre, sponsored by BMO Financial.

The evening is anchored in music inspired by Shakespeare's work, variously performed by Kevin Fox (singer/cello), Erika Raum (violin), and Andrew Burashko (who performs on piano in all of the music and dance pieces). The brilliantly inventive program incorporates the following elements: 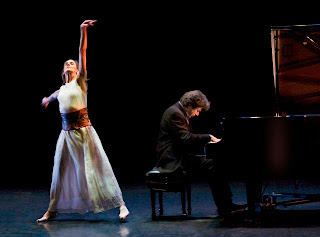 Kevin Fox performs two sonnets by Canadian singer-songwriter Rufus Wainwright. Interspersed through these is a colourful collection of readings about Shakespeare from writers and thinkers such as Jorge Luis Borges, Herman Melville, Nathaniel Hawthorne and Virginia Woolf, among others.

Award-winning director David Ferry takes the theatrical reins to direct veteran actors Ted Dykstra and Lucy Peacock as well as up-and-comers Cara Ricketts and Marc Bendavid as they interpret some of the Bard's most famous works in addition to the above mentioned readings.

Ricketts performs Ophelia's unforgettable mad scene from Hamlet, followed by Peggy Baker's performance of her choreography Why the Brook Wept, set to John Cage's Ophelia for solo piano, for which she previously won a Dora Award for Outstanding Performance.

Dykstra and Peacock perform four amusing short scenes as Benedick and Beatrice from Much Ado About Nothing, alternating them with Korngold's suite of four pieces - Much ado about nothing - for violin and piano. Dykstra also performs the Prologue to Romeo and Juliet, which is followed by Sergei Prokofiev's solo piano work March of the Montagues and Capulets, performed by Burashko.

Ricketts and Bendavid then perform as the star-crossed lovers in the 'Romeo and Juliet before parting' scene from the play. This beautiful evening culminates in Canadian dance legend's James Kudelka's Romeo and Juliet Before Parting, set to Sergei Prokofiev's work of the same name performed by dancers Tanya Howard and Patrick Lavoie, both first soloists with The National Ballet of Canada.