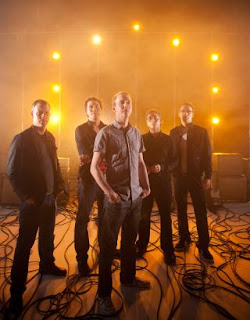 SHORTWAVE are poised to release their debut full length album, The Skyline Verses. Anthems of heartbreak and triumph that tug at the heartstrings and speak to the masses. Their new-wave indie-rock is smart and sexy. Pulsating dance-rock and contemplative ballads that fit comfortably into Pops collective conscience.

With the aid of seasoned producer Byron Wong (The Crystal Method, Beck, David Bowie) SHORTWAVE fuse together the warmth of vintage analog gear with the latest in studio technologies creating an album that is as contemporary and immediate as it is reminiscent and familiar.

It helps that the band has been together for over 5 years and can trace their origins back to their childhood. Brothers Ry (vocals/guitar) and Sager Johnson (guitar) grew up in Toronto with Devin Jannetta (drums), forming various bands and sharing stages with artists like Big Sugar, Junkhouse and SuperFriendz. This dedication and familiarity creates an environment where ideas are explored and honed as they seamlessly shift tempos, layer harmonies and dive into the sonic vastness of keyboards and effects.

The Skyline Verses by SHORTWAVE

Things started to galvanize for SHORTWAVE in the summer of 2008 when they were invited to New York to record at the home studio of expat and Grammy awarded producer Malcolm Burn. This is where their self-titled EP was born. Several tracks received licensing placements as well as airplay on 102.1 The Edge and CBC Radio. Their self-produced video for Stereo received rotation on MuchMusic and was also a featured video on MySpace. In 2009 SHORTWAVE was featured in the first episode of AUX TV’s Master Tracks. Recording one song in a day at Metal Works Studio with producer’s Moe Berg and Laurence Currie.

SHORTWAVE are in their element when the five members are on stage together. Their energy and swagger serve them well as they rollick through their catchy set. They’ve recently played alongside Cracker and The Waking Eyes as well as headlining shows at the Mod Club, Lee's Palace and the Legendary Horseshoe Tavern. The band is anxious to take their new album and live show on the road and introduce themselves to a whole new audience. Partnering with The MuseBox for promotions and marketing, SHORTWAVE are excited to get the word out as they roll out on tour.