LCT3 presents the world premiere of an LCT3 commission, WHEN I COME TO DIE, a new play by Nathan Louis Jackson, directed by Thomas Kail. 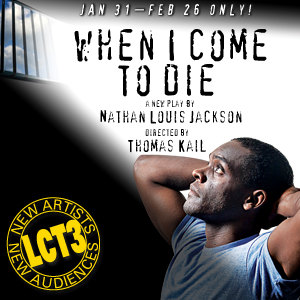 When I Come to Die
AT The Duke On 42nd STREET
A NEW 42ND STREET® project
PREVIEWS BEGIN MONDAY, JANUARY 31
OPENING NIGHT IS THURSDAY, FEBRUARY 10

WHEN I COME TO DIE tells the story of Damon Robinson, a death-row inmate played by Chris Chalk (Fences), who struggles to find faith and hope and understand why his life has been spared after he survives a lethal injection.

This new play re-unites author Nathan Louis Jackson and director Thomas Kail, who brought Broke-ology to LCT in Fall 2009. Nathan Louis Jackson is a two-time Lorraine Hansberry Playwriting Award winner. His television writing credits include "Shameless", "Southland" and "Lights Out". Thomas Kail received a Tony nomination for directing In The Heights and most recently, directed the current Broadway production of Lombardi, a new play by Eric Simonson.

LCT3, Lincoln Center Theater’s programming initiative devoted to producing the work of new artists and developing new audiences, has announced that Michael Balderrama, Chris Chalk, Neal Huff, David Patrick Kelly and Amanda Mason Warren will be featured in its world premiere production of WHEN I COME TO DIE, a new play by Nathan Louis Jackson, directed by Thomas Kail, the second of of LCT3’s three productions during the 2010-2011 season. WHEN I COME TO DIE will begin previews Monday, January 31, open Thursday, February 10 and run through Saturday, February 26 at The Duke on 42nd Street, a NEW 42ND STREET® project, (229 W. 42 Street).

WHEN I COME TO DIE will have sets by Robin Vest, costumes by Emily Rebholz, lighting by Betsy Adams and sound by Jill BC DuBoff. Nathan Louis Jackson returns to LCT where he made his New York 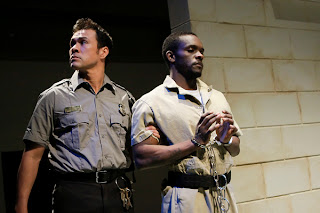 playwriting debut this past fall with his play Broke-ology, also directed by Thomas Kail. A writer for the television series Southland and the upcoming Shameless, he has participated in The Kennedy Center Summer Playwriting Intensive, William Inge 24 Hour Play Festival and Ebony Theater’s “The Word” (monthly poetry slam). In addition to the LCT production of Broke-ology, Thomas Kail directed the play’s world premiere at the Williamstown Theatre Festival.

Citing the need to develop strong relationships with new artists and to build new audiences, Lincoln Center Theater (under the direction of Andre Bishop, Artistic Director, and Bernard Gersten, Executive Producer) created LCT3 to offer these artists fully staged productions. LCT is currently building a new theater, rehearsal space and office complex on the roof of the Vivian Beaumont Theater. The 131-seat theater, to be named the Claire Tow Theater, is scheduled to open in early 2012 and will be the home of LCT3. Paige Evans is Artistic Director/LCT3.

MICHAEL BALDARRAMA Broadway: In The Heights, Hot Feet, Movin’ Out, Saturday Night Fever, Ubran Cowboy. Regional: West Side Story, The King and I, Ballet Hispanico. Film/TV: Across The Universe, All My Children 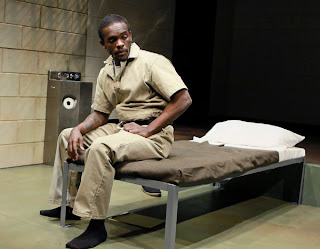 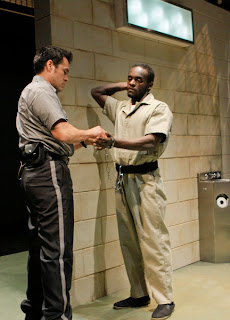 WHEN I COME TO DIE
a new play by NATHAN LOUIS JACKSON
directed by THOMAS KAIL
Running Time: 1 hour, 30 minutes (no intermission)