on February 07, 2011
From a media release - I did an interview with Kwame last summer before the play's premiere: 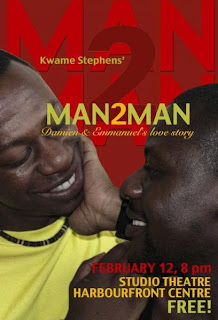 • Admission is FREE of charge, so come early to get a good seat

First staged to sold out audiences in June 2010, this riveting play is coming to Harbourfront Centre’s Studio Theatre, starring Frederick O'Neal and Tawiah M'Carthy. They are joined by new cast members Kurt Strachan as Pastor Everton along with Lameck Williams and Corey Bertrand. Even if you saw it last summer, come and see Damien and Emmanuel's love story told in a new way.

Kwame Stephens’ Man 2 Man deals with the love story between Damien, a young man in his 20s, and the older and more mature Emmanuel. When they first met, it was not love at first at sight. Damien was sure of his sexuality. Emmanuel, who had recently separated from his wife, was still coming to terms with his sexuality. Of all places, these two men met at a church where Emmanuel's singing entranced Damien. This sets the stage as we join Damien and Emmanuel's struggle to make sense of love, lust and life from first encounter to committed relationship. The play, first staged to a sold out audience at Buddies in Bad Times Theatre in June 2010, has been described as honest, humourous and tragic. 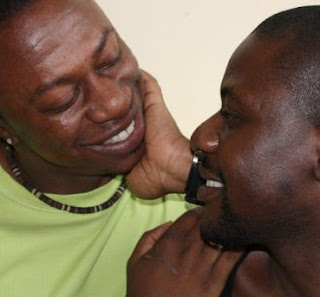 ABOUT THE ARTISTS:
Man 2 Man is directed by Canute Lawrence whose directorial credits include Marcia Brown Productions’ Feminine Justice. Man 2 Man stars Frederick O' Neal as Emmanuel and Tawiah M'Carthy as Damien. The cast features Kurt Strachan as Pastor Everton, Lameck Williams as Jason and Cory Bertrand as Claude.  Frederick O'Neal is a graduate of George Brown’s Theatre Arts program and has appeared in numerous productions including See Here! It’s Africa and the Caribbean. Tawiah M'Carthy's  The Kente Cloth  was featured at Summer Works Theatre Festival in 2008. Man 2 Man is written by Kwame Stephens.

This is a FREE Event and will be followed by a Question and Answer period.  Kwame Stephens’ new  anthology of poems called “Banyin Na Banyin” – meaning man and man – will be on sale for just $10.00 a copy.