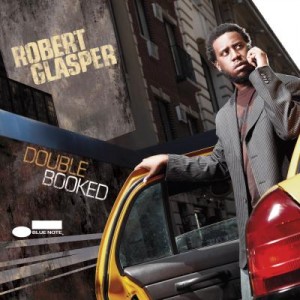 One artist, two distinct but interwoven concepts: this is the captivating logic behind Double-Booked, pianist Robert Glasper’s third album for Blue Note, following up Canvas (2005) and In My Element (2007). An artist who “unfailingly gets the feeling right” (New York Magazine), Glasper has made waves throughout the music world as leader of both the acoustic Robert Glasper Trio and the electric, hip-hop-oriented Robert Glasper Experiment. With Double-Booked the 32-year-old Houston native puts his enviable versatility front and center, emphasizing these different hemispheres of his musical brain at the same time.

Career-wise, this creates a constant balancing act, and on occasion literally being double-booked, appearing with the Trio and the Experiment on the same night. Such is the storyline that emerges on Double-Booked, with conflicting voicemail messages from Terence Blanchard and Roots drummer Ahmir Guestlove Thompson, each pulling for a different Glasper band.

The first six tracks on Double-Booked feature Glasper in Trio setting with longtime bassist Vicente Archer as well as drummer Chris Dave, who plays in Glasper’s Experiment band but recently came on board the Trio as well. “It’s hard to find that common thread in one cat,” Glasper enthuses. “Very few cats out there are extremely convincing in all genres of music. There’s always a wink-wink somewhere, like they play jazz really good but the hip-hop’s a little strange, or vice versa. Chris has both sides down on an even level, and he keeps on creating. He and Vicente used to play together with Kenny Garrett, so they have a history that made the linkup a lot easier. He knows the Chris-isms and Chris knows the Vicente-isms.”

The Trio portion of Double-Booked culminates with an astonishing treatment of Thelonious Monk’s “Think of One.” In an ingenious and totally natural overlay, Glasper seizes an opportunity in last A section to quote Ahmad Jamal’s “Swahililand,” the chord progression that formed the basis of De La Soul’s 1996 hip-hop classic “Stakes Is High,” co-written by Glasper’s hero and friend, the late beatmaster J Dilla. 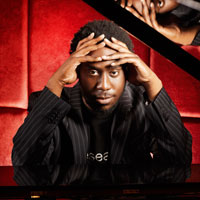 From that point forward, we are firmly in Experiment-land, with Chris Dave remaining on drums—although the drum sound on this half of the album can be markedly different from the first. “4Eva,” a live excerpt featuring rap icon Mos Def, leads us straight into another world. “Butterfly” is originally from Thrust, Herbie Hancock’s 1974 landmark album. Hancock, as both a pianist and a genre-crossing innovator, is of course a huge influence on Glasper. “It just happens that every one of my records has a Herbie tune—it seems like I’m doing it on purpose,” Glasper says. “I’m not. But I had to put this on the record because it’s dope.” Casey Benjamin’s vocoder effects heighten the mystery of the melody, and a J Dilla beat called “Fuck the Police” serves as a rhythmic foundation.

HERE'S A GREAT VIDEO OF ROBERT GLASPER EXPERIMENT WITH A GUEST APPEARANCE BY BEYONCE! 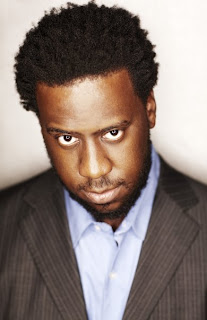 Benjamin’s arsenal of sonic effects is at the fore of “Festival,” colored by Glasper’s Fender Rhodes, taking wild, digressive turns over the course of 10 minutes—the Experiment sound at its most representative and expansive. “Casey has so many pedals, it’s a whole thing when he sets up, he has to go to the gig before us,” says Glasper with a laugh, noting that Benjamin is playing only alto saxophone and “nothing’s overdubbed.” A short transitional piece, “For You” by Benjamin and drummer Sameer Gupta, leads into “All Matter,” a striking, unclassifiable original by vocalist Bilal Oliver. Glasper offers: “You can really do this song in any situation, and it does stick with you. So pretty.” Derrick Hodge, the Experiment’s bassist, an accomplished composer as well as a top-shelf jazz and hip-hop sideman, contributes the final track, “Open Mind,” also featuring Bilal. It’s “a spiritual tune” in Glasper’s words, with additional textures and voice elements from turntablist Jahi Sundance, the son of alto saxophone great Oliver Lake.

Hailed by listeners and critics, Glasper has also garnered the respect of the toughest audience of all: musicians from across the jazz spectrum. In a May 2008 Blindfold Test for Down Beat magazine, a fellow pianist instantly identified Glasper and praised him as “a fantastic musician,” pinpointing characteristics of his unique style: “a harmonic maze, but also an insistent rhythm, certain turns and filigrees and ornaments, some of them sort of gospelish.” With Double-Booked, Glasper further develops all these elements and pulls them together in a new synthesis, continuing his ascent to the top ranks of modern jazz artistry.