Toronto fans can thank Batuki Music for bringing guitar whiz Bombino to town next month! Check the link for details. 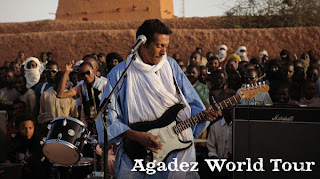 Omara "Bombino" Moctar, a young Tuareg guitarist and songwriter, was raised during an era of armed struggles for independence and violent suppression by government forces. His electrifying jams capture the spirit of resistance and rebellion. Agadez

, his debut album on Cumbancha Discovery, is available worldwide as of April 19, 2011.

Buy the CD here to get a free download of the Exclusive Digital Bonus Album with extra tracks and live cuts.

Starting this June, Bombino and his band embark on a four month world tour in support of his new album Agadez

. Beginning in Europe at major festivals in the Netherlands, Bombino will bring his scorching brand of desert rock to thousands at hip clubs, such as Le Poisson Rouge in NYC, and huge amphitheaters including Chicago's Millennium Park and Los Angeles' Hollywood Bowl, where he will perform with Stevie Wonder and Janelle Monáe!


The tour will take him all over Western Europe and then to North America with dates including Chicago, NYC, Cali, Montreal & Surrey BC.

Here's a taste of what you'll experience live: