The consistently sold out, Happy Ending Music and Reading Series, chosen by New York Magazine and NY Press as the best reading series in NYC, and singled out by the New York Times Magazine for helping to "Keep downtown alive," features the most interesting storytellers, writers, musicians, raconteurs and personalities, and requires the readers to take one public risk, while the musicians, who perform two short sets with their original, lyric-driven music, are required to play one cover song and try to get the audience to sing along. Called the “most vital authors’ series in the city,” by Time Out NY, and known for its consistently good taste, Happy Ending has launched careers and proudly, ended none. 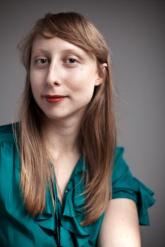 , was published in February. Her fiction and essays have been published in The Paris Review Daily, Tin House, Cousin Corinne's Reminder, and many other journals. Her first novel, Laura Lamont's Life in Pictures, is forthcoming from Riverhead Books. She sells books at BookCourt, one of New York City's finest independent bookstores. More information (and brownie recipes) can be found at www.emmastraub.net (she's pictured left).

Daniel Knox moved to Chicago from Springfield in 1999 to attend film school.  Frustrated with classes, he spent most nights sneaking into the Hilton Tower’s Grand Ballroom where he taught himself to play their piano.  With comparisons being made to songwriters such as Randy Newman, Richard Swift and Antony, Knox - who has already shared stages with Damon Albarn,  Rufus Wainwright, and the Handsome Family - is fast living up to the London Evening Standard's proclamation that he's "a name to watch".  A rogue at the piano, Knox croons and sneers so that his cast of characters may speak.  He recorded Evryman for Himself, mostly in his kitchen, with contributions from David Coulter (Damon Albarn, Nick Cave) and Ralph Carney (the B52's, Tom Waits, The Black Keys).