CSI: New York's Robert Joy to Star in Theatre by the Bay's The Tempest July 1 - 16 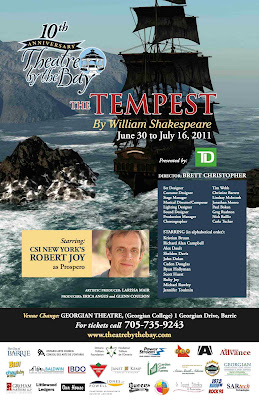 June 22,  2011 - Theatre by the Bay has announced that its upcoming production of William Shakespeare's The Tempest, will be performed at the Georgian Theatre in Georgian College, 1 Georgian Drive in Barrie. The production will open on July 2 and run to July 16 with a preview on July 1 only.

Shakespeare's The Tempest tells the story of the deposed Duke Prospero and his daughter Miranda who are stranded on an island full of spirits and mysticism. Through his magical powers, Prospero conjures a storm to bring the men that conspired against him to the island. Once they arrive, the conspiracies, betrayals and deceit begin as Prospero attempts to return his family to power. Romance, comedy and action abound in this classic Shakespeare play.

The play also stars Jennifer Toulmin (Anne of Green Gables at the Charlottetown Festival, Mamma Mia! touring production) as Ariel, Ryan Hollyman (Andromache for Necessary Angel/Luminato, The Mill parts 1, 2, 3 and 4 for theatrefront/Young Centre) as Caliban, Caden Douglas (CanStage's The Rocky Horror Show, Mirvish Productions' Mamma Mia!) as Ferdinand, Michael Rawley (The Lion King Toronto and touring productions, The Taming of the Shrew for Theatre by the Bay) as Alonso, Sheldon Davis (Leading Ladies for Victoria Playhouse Petrolia, Honk! For Globe Theatre) as Antonio, Richard Alan Campbell (Obsidian Theatre's Ruined, VideoCabaret's The Great War) as Sebastian, John Dolan (Dora winner for Oliver Twist, over 20 productions at Stratford Festival) as Gonzalo, Scott Hurst (Peter Pan and King of Thieves at Stratford Festival) as Trinculo, Kristian Bruun (Evil Dead the Musical at Diesel Playhouse, Soulpepper's Hamlet) as Stephano and Alex Dault (Theatre by the Bay's As You Like It, Much Ado About Nothing) as the boatswain. 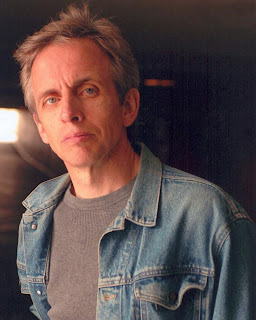 Robert Joy currently stars as Dr. Sid Hammerback in "CSI: New York." He has also made notable appearances in the films Desperately Seeking Susan, Atlantic City, Land of the Dead, Ragtime, Radio Days and the Canadian film Ticket to Heaven, as well as in television series such as "Medium," "Everybody Loves Raymond," "Boston Legal," "Without a Trace," "Star Trek: Voyager" and "Law and Order." A member of the Newfoundland comedy group CODCO for four years, his stage appearances include Peter in Toronto and New York productions with Eli Wallach of The Diary of Anne Frank (for which he was named one of the New Faces of the Theatre Season by the New York Times), Mercutio in Romeo and Juliet at the La Jolla Playhouse (for which he won a Drama League Award), Huck Finn in the world premiere of Big River (Cambridge's American Repertory Theatre) and the title role in the Broadway comedy The Nerd.