New York, NY - Summertime recalls bad Hollywood movies, less clothes, and funny tanlines. But what about music? New York's synth rockers Jump Into The Gospel kick off the scorching temperatures with a new 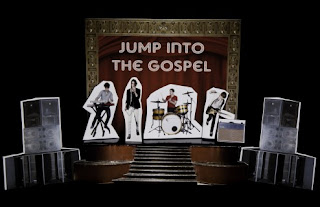 single and a slew of NYC dates.

On May 31, The Music Slut premiered the band's latest single "2012" to celebrate the band's June residency at Pianos June 8th, 15th, 22nd, and 29th. With spunky vocals reminiscent of Talking Heads' David Byrne and The Rapture's Luke Jenner, and guitars and synths oozing with bright vivacity, "2012" adds up to pure summer music.

Be sure to catch JITG each Wednesday this June at Pianos for a night of the warm, fuzzy, new wave rock that we've all come to love. For all those who splurged on other summer delicacies (ie. kiddie pools, jet skis, frozen margaritas), the final show of JITG's residency on June 29th will be a free one.


In the spirit of proper DIY, Jump Into The Gospel have also released a self-titled 7" EP which includes a trifecta of bangers, along with a remix by Grvrbbrs (members of Cobra Starship). The EP was recorded with Ben Liscio (who has collaborated with producers and artists Rich Costey, Dave Sitek, The Strokes, and TV on the Radio). Jump Into The Gospel have already begun turning heads with their full-throttle approach to live performance. Nylon Magazine gushed saying "the songs might have a sugary, guilty-pleasure vibe, with music this good, you definitely don't have anything to feel guilty about".  With a spate of new songs on the way, be sure to catch them for all released and unreleased gems during their Pianos residency starting June 8th at Pianos.