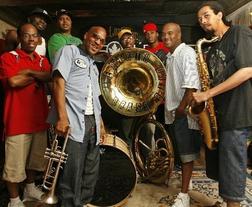 Simply put, The Rebirth Brass Band is a New Orleans institution. Formed in 1983 by the now infamous Frazier brothers, the band has evolved from playing the streets of the French Quarter to playing festivals and stages all over the world.

Rebirth is committed to upholding the tradition of brass bands while at the same time incorporating modern music into their show.  Their signature brand of heavy funk has not only won over several generations of music lovers, it has become the soundtrack to an entire city.  In the wake of the sometimes-stringent competition amongst brass bands, Rebirth is the undisputed leader of the pack, and they show no signs of slowing down.