[Toronto ON]  Raucous roots, genre bending string super-group, Sultans of String, kick off their Canadian & US CD release tour in Toronto with a spicy performance at Trinity St. Paul’s Centre on Saturday, 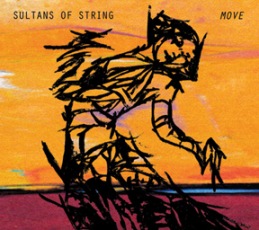 The release of MOVE, the band’s third album, can only be thought of as a perfect hat-trick. These multiple award winning and JUNO-nominated string wizards present – once again – an exhilarating celebration of world music styles and influences that embrace Gypsy Jazz, Cuban rhythms, Arabic folk, Spanish Flamenco and classical music in an incomparable and blinding flurry of musicianship. It’s as if Chris McKhool and Co. have entered a cross-cultural time machine. How else could these talented individuals have absorbed so many generations’ worth of musical influences in such a short time? 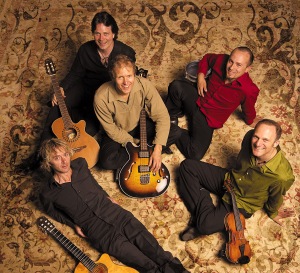 The travelogue begins with “Andalucia”, establishing its strong claim to its location in southern Spain before changing gears as violin replaces its flamenco sounds with a sharp turn towards Northern Africa, complete with funky bass. Likewise, “Dos Guitarras” begins flamenco-like before McKhool’s violin gives way to dueling guitars in a composition that seems broken into 4 parts, like a play. The beautiful “Montréal” begins gently, like the whispering of lovers before it goes upbeat, adding horns and energy while the hard left turn of “Emerald Swing” with its upbeat, swinging bluegrass feel – and distinctive acoustic bass solo – deftly demonstrate the wide-reaching range of this band.

There’s no denying that creativity collides with pure passion across each of these dozen tracks and, just when you think you might be figuring them out, they’ll throw in a left-field cover to hide their tracks. Neil Young’s “Heart of Gold” might be the last song you’d expect from the Sultans, yet armed with Dala’s lush backdrop, McKhool and the Gang lay waste to expectations, enticing Neil’s mellow country out of the shade and into the sunshine. Full of surprises, the Sultans of String continue along on their nomadic adventure, covering more ground than can instantly be digested for most.