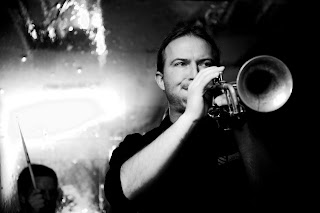 Toronto-based trumpeter and composer Mike Field has the capacity for vision much like a phoenix scanning the landscape and collecting sensory information, creating with intense excitement and deathless inspiration. His latest collection of nine instrumental tracks, called ASHES, delivers a deep and penetrating array of textures and sounds. Playful and sometimes melancholic melodies from Field’s introspective mind are shaped and arranged to suit the traditional jazz quintet, which includes exceptional players like Carlie Howell on upright bass, Dave Chan on drums, Paul Metcalfe on tenor saxophone and Matt Newton playing piano on the recording while pianist Teri Parker joins the band for live performances. 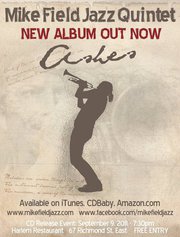 The tunes are mostly upbeat, though with song titles like “Missing in Paris”, “Unwanted” and the title track “Ashes,” there is the sense of loss and longing. Still, there’s somewhat of a reprieve in the sweet piano-based and  lazy Sunday-morning-coffee vibe of “Gotu Kola.” The album features plenty of groove, as well as a completely unrecognizably transformed swinging major blues to minor blues tune called “The Upstanding Translator” and there’s even a waltz!

Although the songs were recorded only recently, the classically-trained Field and his band have been performing them for several years at high-profile festivals including the Downtown Toronto Jazz Festival two years in a row, on tours throughout Germany and France, and on board a ship to Antarctica.

Field can be frequently heard playing with various bands at local concert venues such as The Legendary Horseshoe Tavern, The El Mocambo and The Rex. He has toured Canada three times (with rock/funk band 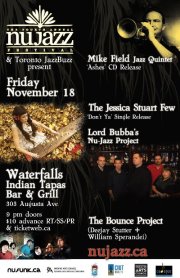 Jay Spectre), played the Beaches Jazz Festival in Toronto and in New Zealand (where his trumpet can be heard in the experimental bossa-nova collective The Inverts). He is also in the well-known reggae collective High Plains Drifter, playing numerous local Bob Marley and Peter Tosh tribute shows.