Montreal, November 4, 2011 – The National Film Board of Canada (NFB) launches HIGHRISE/One Millionth Tower on Wired.com and at London’s Mozilla Festival on November 5, 2011. Utilizing

The world premiere of One Millionth Tower will take place in London on Saturday, November 5, 2011, at the Mozilla “Media, Freedom and the Web” Festival mozillafestival.org, an annual celebration bringing together developers, designers and thinkers to explore the frontiers of the open web, and online at Wired.com. It will debut on the NFB website at highrise.nfb.ca on Monday, November 7.

Mark Surman, Executive Director of the Mozilla Foundation, says One Millionth Tower is “a prime example of the work we are doing together to empower makers and build tools that anyone can use to make awesome things happen—on the Web and in the world. It’s a testament to how we are building a better Web together.”

Tom Perlmutter, Government Film Commissioner and Chairperson of the National Film Board of Canada, says that this project “is part of an ongoing effort by the NFB to bring innovative artists and technology creators, such as the Mozilla Foundation, together to fashion the new interactive art and entertainment forms of the future within the digital sphere. We want our work to define new ways of engaging audiences in documentary experiences. One Millionth Tower does exactly that.”

About One Millionth Tower
More than one billion of us live in vertical homes, many of which are falling into disrepair. In One Millionth Tower, high-rise residents, together with architects, re-envision their vertical neighbourhood, and animators and web programmers bring these visions to life.

One Millionth Tower is based on participatory models of urban design and collaborative documentary methods. To create the project, groups of high-rise residents worked with director Cizek and her team to re-envision their vertical homes. The result is a story with global implications about how, with the power of

imagination, we can transform the urban and virtual spaces that belong to all of us.

ILLUSTRATION BY: LILLIAN CHAN, HOWIE SHIA + KELLY SOMMERFELD, COURTESY OF THE NATIONAL FILM BOARD OF CANADA

One Millionth Tower was designed using state-of-the-art technology called WebGL. Websites designed in WebGL—a free and open-source technology—are able to produce realistic videogame-like graphics directly within the web browser, by interfacing with the graphics “horsepower” provided by the GPU of your computer’s video card. With a WebGL-enabled computer, users can interact with the environment and see it re-imagined as a lively, flourishing community, while users in a non-WebGL enabled system can watch a non-interactive video capture of the documentary play out in a virtual 3D space.

One Millionth Tower also uses Mozilla’s Popcorn.js technology, which reshapes moving images on the web and brings a new interactivity to cinema,  immersing video in the online world as never before. Popcorn is 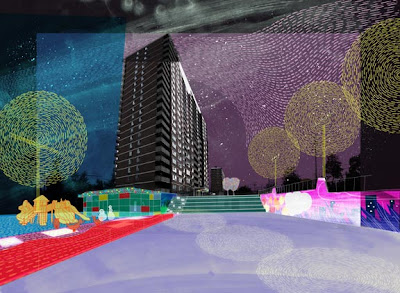 being used to trigger documentary sequences, camera moves, animation, video and audio playback, as well as to pull in data from Flickr and Wikipedia.

ILLUSTRATION BY: LILLIAN CHAN, HOWIE SHIA + KELLY SOMMERFELD, COURTESY OF THE NATIONAL FILM BOARD OF CANADA

An interactive Google Maps feature called World of Highrises takes users to high-rise neighbourhoods in almost any country in the world, thanks to Google Street View and satellite imagery. Users can suggest their own high-rise—or any high-rise—be included in the global visual database. Additional Features include documentaries on tower revitalization and on the open-source web technology used in One Millionth Tower, and a behind-the-scenes look at the project’s creation.

This is the latest web documentary from the NFB’s award-winning multi-year project HIGHRISE, directed by Katerina Cizek and produced by Gerry Flahive, whose previous work HIGHRISE/Out My Window received an International Digital Emmy Award and the inaugural IDFA DocLab Award for Digital Storytelling at the prestigious International Documentary Festival Amsterdam.