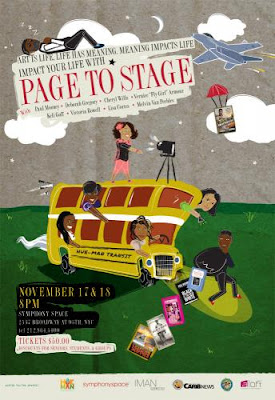 The end result is a theatrical and thought-provoking show that touches on a variety of topics such as religion, wealth, sex, mentorship and family. The hour long dramatization will be directed by Ozzie Jones, who has directed for Ntozake Shange. Following the stage performance will be a round table discussion with the authors & celebrities which will fully engage the audience. The moderator of this discussion is Lisa Cortes who was executive producer on the award-winning film Precious.

Page to Stage will benefit the Melvin Van Peebles Foundation to promote literacy. The event is sponsored in part by by Iman Cosmetics, Symphony Space, A-Loft, Carib News and Alphabet Kids.