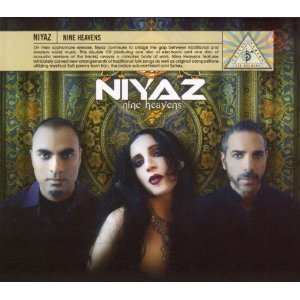 This may seem like a tall order for a band that’s barely three years old – until you realize who these musicians are. Vocalist Azam Ali co-founded the best-selling world music duo Vas in 1996; her unmistakable voice has graced numerous recordings and major film scores. Loga Ramin Torkian is a multi-instrumentalist whose group Axiom of Choice brought the ancient sounds of Persian classical music to Western listeners in the 1990s. And producer Carmen Rizzo, a multiple Grammy nominee, has worked with Coldplay, Seal, Ryuichi Sakamoto, and many others.

Small wonder then that the trio hit the ground running with its self-titled debut. Now, with Nine Heavens, Niyaz breaks new ground in a two-disc format: the first is an adventurous, spiritual exploration of the ties that bind Persian, Indian, Turkish, and Western dance music. The second disc showcases 8 out of the 9 songs in a purely acoustic setting.