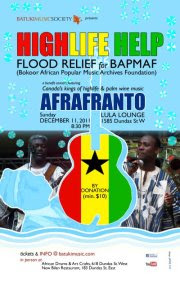 TORONTO - BAPMAF: The Bokoor African Popular Music Archives Foundation is a Ghanaian NGO established in 1990 by Professor John Collins.  BAPMAF’s function is to preserve African popular & traditional performance and provide a resource centre for arts projects in Ghana and the international community.

BAPMAF archival holdings include 700 photographs, 700 publications, as well as many rare documents, speeches, posters, and record sleeves; 40 videos and 850 hours of recorded music, including 700 highlife songs on shellac 78 rpm records and master-tapes of Ghanaian bands recorded at Bokoor Recording Studio in the 1980’s. 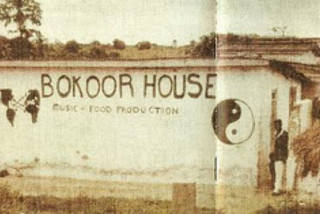 THE FLOOD: Devastation struck Oct. 26 2011 when the BAPMAF building and surrounding area was flooded during heavy rains. Six feet of water entered BAPMAF premises as well as John Collins’ private residence. John’s family narrowly escaped drowning. The building and area are now too dangerous for human habitation.  There is a considerable loss of archival holdings, electronic equipment, and personal property.

JOHN COLLINS is a musician, author, producer, recording engineer, and the Acting Chairman of BAPMAF.  John has been involved in Ghanaian music since 1969.  In the 1980’s he opened Bokoor Recording Studio, Ghana’s first private multitrack facility. He has recorded and worked with many of West Africa’s great musicians, including: Fela Kuti, Koo Nimo, King Bruce, and Kwaa Mensah.

John Collins is currently a Full Professor in the Music Department of the University of Ghana.  His books include: FELA Kalakuta Notes, African Pop Roots, and Music Makers of West Africa.  Music recorded at