Sia Tolno is one tough singer. 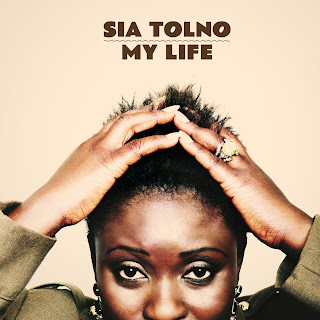 With a velvet and gravel voice reminiscent of the great Miriam Makeba, Tolno has triumphed over war, abuse, exile, and migration. She’s worked as a palm oil saleswoman and a cabaret singer. She’s defied deadly conflicts and immigrant woes, filled with a fiery sense of right and wrong and with a deep love of music that bursts out of every twist and moan of her compelling voice.

With songs that spring from her hard-earned wisdom and experience, Tolno shares My Life (Lusafrica; December 6, 2011), arranged by French prog-rock legend François Bréant, respected for his work with artists like Salif Keita. My Life blends Afropop, delicate moments of soul and rock, and traditional instruments to match Tolno’s earthy sophistication.

“In my songs, even when I’m talking about sadness, it’s not about despair or self-pity,” muses Tolno. “I want people to know that I went through all these things but still, I’m leaving the past to walk toward the things I love. I’m so happy for that. And the only way to share this happiness is to make others happy through my songs.”

***
It’s easy to get caught up in Tolno’s story: daughter of a strict father and abusive stepmother who fled her home to wind up living in an apartment with thirty other people, she was forced to leave war-ravaged Sierra Leone for Guinea, losing many loved ones and watching her once strong community crumble into bloodshed. 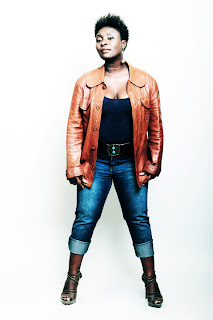 Ever resourceful, Tolno sang in clubs, gaining respect and devoted fans. She sold palm oil. She did what she had to do, until she was discovered by a European music exec at a talent contest (she won third place—but started an international career that exceeded her wildest hopes).

But Tolno’s real truth lies in fervent hope and intense joy she conveys. It flows from deep roots and her own keen sense of uprootedness, from the village she conjures in songs like “Blamah Blamah,” a rolling, upbeat tribute to remembered festivities of her childhood.

“Blama is the name of the town in Sierra Leone where we would all go for a festival at the end of every year,” Tolno explains, a town now dominated by ruins. “I wanted to tell people that in this town we had a very joyful festival, where we just sing and play all these traditional instruments. I wanted to open with my tradition, to show where I am from.”

Even when condemning the corruption and violence that dismays her, or pointing out the disrespect afforded to women of all stations around her, Tolno keeps a driving positivity whether she’s mounting a catchy Afrobeat-inflected call to respect African women (“Odju Watcha”) or a searing indictment of careless politicians (“Polli Polli” and “Shame On U”) or thankless lovers “Di Ya Leh.”

Her joy springs from one source: Music, whether it’s Congolese rumba (“Tonia”) or a desert blues-flavored anthems like “Touma Touma;” whether she’s whipping out gritty lines in Creole or English, or soaring through 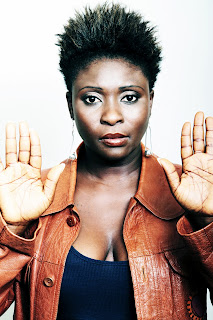 twining melodies in her native Kissi.

In the few truly content moments she remembers, Tolno used to comfort herself by singing along to Tina Turner and Edith Piaf. “Their songs talk about the reality. That’s the same role I would like to play in my music,” Tolno notes. “I always wanted to be a lawyer as a child, to defend innocent people. Now I try to give out political and life messages, in a very positive way. I’ve lived war and I know what it’s like—and why it has to stop.”

“There is no country in Africa where you can build a house and know it will still stand in a hundred years,” Tolno reflects. “With our history, you have to keep building things over and over, saying things over and over. It’s time we opened our eyes and mended our minds. We have to fight positively.” This positive fight Tolno wages in rippling, high-energy form, rich with her powerful, warm alto and relentless optimism.