The COC's Lavish Tosca Jan 21 to Feb 25 in Toronto

one of the world’s most popular operas comes to life in the coc’s lavish production of tosca starring canada’s adrianne pieczonka
January 21 to February 25, 2012

Toronto – One of the most popular operas of all time, Giacomo Puccini’s Tosca, opens the Canadian Opera Company’s 2011/2012 winter season.  The COC brings back its lavish 2008 production by director 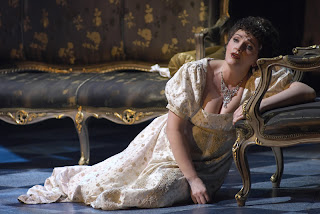 Paul Curran, showcasing renowned Canadian soprano Adrianne Pieczonka in her COC role debut as the passionate and fiery heroine.  Italian conductor Paolo Carignani, former general music director of Oper Frankfurt, makes his company debut leading the COC Orchestra and Chorus.  Tosca runs for 14 performances on Jan. 21, 25, 29, 31, Feb. 3, 5, 7, 9, 11, 13, 16, 21, 23 and 25, 2012 at the Four Seasons Centre for the Performing Arts and is sung in Italian with English SURTITLES™.

Tosca’s fast-paced plot is full of romance and intrigue.  Set in Rome in 1800, Tosca is a famed opera singer whose lover has revolutionary sympathies.  In trying to protect the man she loves from a blood-thirsty chief of police, Tosca finds herself caught in a web of corruption, lust and betrayal and ultimately commits an act of murder.  The title role is one of the composer’s most complex and fascinating heroines, fit for great operatic actresses.  Pieczonka, most recently with the COC last spring in the title role of Ariadne auf Naxos, calls Tosca her “dream role” and has drawn high praise for her portrayal since making her role debut in 2008: “She was radiant,” says the Los Angeles Times, and “Pieczonka’s Tosca is the quintessential diva, rendering her signature arias with ease and verve” describes SF Weekly.  Sharing opera’s hallmark “diva” role is American soprano Julie Makerov, whose vocalism and dramatic intensity as Tosca has made her “every inch the imperious diva, moving from flashing-eyed jealous lover to abused woman to penitent 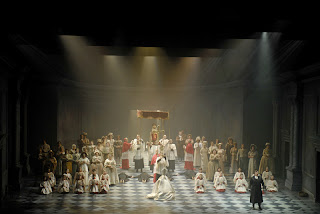 Making their COC debuts as Tosca’s lover, Mario Cavaradossi, are two tenors recognized by the world’s leading opera companies for their dramatic and vocal prowess: Uruguayan Carlo Ventre and American Brandon Jovanovich.  The opera’s evil chief of police, Baron Scarpia, is sung by American baritone Mark Delavan, making his company debut in a role that he’s imbued with “leering lust and the total technical control of a vocal palette that could paint as many colors as the drama demands.” (Associated Press) 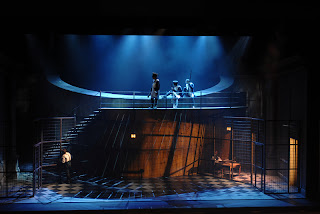 Tosca’s Empire-era costumes and stunning sets of chapels, palaces and fortresses of 19th-century Rome are brought to life in the set and costume design of Kevin Knight, and the atmospheric lighting design of David Martin Jacques.

Tosca premiered to mixed reviews in 1900, but has since become one of the most performed operas in the world.  A staple of the operatic repertoire, Tosca is an unforgettable theatrical experience and features some of the composer’s most deeply felt and dramatic melodies.

This production of Tosca is a COC co-production with the Norwegian National Opera and Ballet.

Standing Room
Sixty $12 Standing Room tickets are available at 11 a.m. the morning of each performance, in person only at the Four Seasons Centre Box Office.  Limit of two tickets per person.  Subject to availability.

Young People
Special young people’s tickets are priced from $22.50 to $107.50 (includes applicable taxes).  These ticket prices apply to those who are 15 years of age or under, accompanied by and sitting next to an adult.