"The fastest fingers this side of Django Reinhardt" -Metro NY

NEW YORK CITY - French virtuoso guitarist Stephane Wrembel is at the vanguard of the Gypsy Swing renaissance in the US. He seems to have channeled both the technique and the fire of Django Reinhardt and 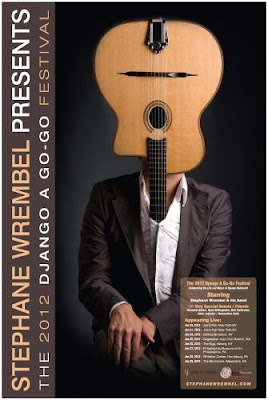 has - quite literally - written the book on Gypsy Jazz: "Getting into Gypsy Jazz", published by Mel Bay.

His new cd, Barbès Brooklyn, has Stephane and guests playing a mixture of standards and original, updating the classic Gypsy swing repertoire and reminding his audience that Stephane's music is solidly anchored in the present.

Stephane Wrembel grew up in France where, for years, he studied guitar with the manouche (the French Gypsies). He has also gotten deep into various American vernacular musical styles - from Blue Grass to Jazz. He has performed and toured and recorded with such luminaries as Mark O'Connor and David Grisman (with whom he recorded the album Gypsy Rumble) and performed with Lionel Loueke, Les Paul and Angelo Debarre. He is a regular guest at Djangofests and festivals both in Europe and in the US.
He will appear with his trio, which includes percussionist and washboard kit master David Langlois and bassist Jared Engel - as well as frequent collaborator violinist Olivier Manchon and special guests tba.