Short Film: The Man That Got Away Premieres at the Berlin Film Fest 2012 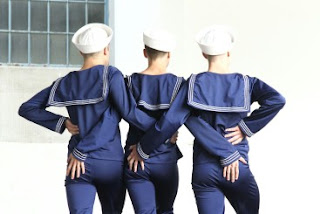 Hey! So the film won the DAAD Prize for Best Short Film at the Festival, with special mention of my friend's "outstanding music"!

I have some exciting news to share with you!

A World Premiere in Germany: "The Man That Got Away" at the Berlin International Film Festival

In spring of 2009 I began collaborating on a movie-musical short film with Trevor Anderson, director and producer at Dirt City Films. (Click to read more about the film!) We wrapped up production in fall of

2011. I composed music for six new songs, and also wound up starring in the film as Trevor's great uncle Jimmy.

The soundtrack was recorded at Doug Organ's Edmontone Studio, and we shot entirely on location in a spiral parking garage in downtown Edmonton. Now, after a lot of hard work and much anticipation, we are gearing up for our big trip to Berlin for the film's world premiere at the 62nd Berlinale film fest! It's the only Canadian short accepted into the festival. Needless to say, I'm super excited to watch the film on the big screen with a live audience. There will be several opportunities to catch the film during the festival, and we've also been invited to a special screening and artists' talk at the Canadian Embassy. It's exciting!

Of course, Berlin isn't the only place you can catch a screening of "The Man That Got Away." There will be a private screening, for crew and supporters, in Edmonton on February 25th. To receive an invite, donate to our CD soundtrack fundraising campaign on IndieGoGo. There are various rewards available for each donation level (including copies of my album "Tin Can Telephone"), so check out the perks!

A Fundraising Event
Because the budget for the film is gone, I'm paying my own way to be at the premiere in Germany. To that end, I'm playing a fundraising show at Le Balluchon Raymond (click for details!) in Toronto, on Thursday January 26th, doors at 7:30pm, show at 8pm. Tickets are $20 at the door (fundraiser!); come, and I'll sing for you. You'll even get to hear a sneak preview of the soundtrack!


THE MAN THAT GOT AWAY movie trailer from Trevor Anderson on Vimeo.