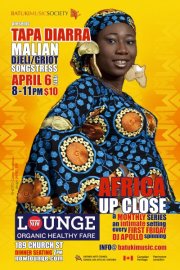 TORONTO - When a griot comes to town, you have to show up, c'est comme ça, so I was part of the crowd in the intimate NOW Lounge last night to check out Montreal-based trio fronted by Sountougoumba "Tapa" Diarra, formerly of Mali and daughter of famed singer/griot Kandia Kouyate. The trio was rounded out by the nimble fingers of Diely Mori Tounkara on kora and guitar, (he's kin to legendary Super Rail Band guitarist Djelimady Tounkara,) and Montreal musician and producer David Mobie on keyboards.

Percussion came from Toronto/Paris based Amara Kante along with locals Amadou Kienou and Alan "Mamadou" Legall (of the group Baro Dunumba) - a kind of West African reunion on a cool April evening that soon resulted in the kind of music that doesn't let you sit still. I love the bright sound of Malian music with its layering of soaring griot style 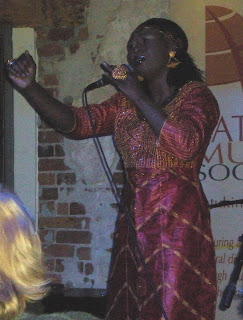 vocals over those irresistable polyrhythms.

Tapa Diarra's music is based on traditional rhythms and melodies with the odd twist; age old melodies on the kora and in the vocal line while David Mobie filled in with jazzy chords and rhythms on the keyboard.

There wasn't a seat left in the house and what room there was for dancing was taken up. The "Africa Up Close" Series continues on the first Friday of every month.