Jazzanova takes it to the next stage: The Funkhaus Studio Sessions

Jazzanova producers, Stefan Leisering & Axel Reinemer, went into the studio with their 7 piece live band with Paul Randolph on vocals to record a 14 track set.

Whoever had the chance to see Jazzanova play live during the last three years knows how magical this experience can be. The Berlin based outfit transports the richness and sublimity of their productions (own compositions and remixes) perfectly on stage. And it adds this extra twist to the performance which makes the music even more tangible and human. In last November the 2 producers of Jazzanova, Stefan Leisering & Axel Reinemer & the original Jazzanova touring band (see below for full line up) brought the spirit of their extensive worldwide tour to the studio to record a typical live set – this time with proper recording gear and state-of-art engineering equipment though.

The “Funkhaus Studio Sessions” marks Jazzanova’s first live album release, including the songs the band learned to love the most on tour over the last three years as well as the audience’s favourites from their initial breakthrough smash “Fedime’s Flight” to “Look What You’re Doin To Me” off the “Of All The Things” album from 2008 and renditions and interpretations of Jazzanova remixes (f.e. 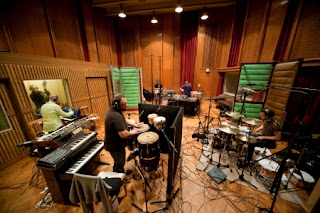 the remix for Fat Freddy’s Drop’s “Flashback“). The 14 track strong set also includes a brand new tune with “I Human,” co-written by vocalist and bass player Paul Randolph, a constant member of the live band and now of course the voice of the “Funkaus Studio Sessions.” An album that will please every Jazzanova fan and every true music lover with an affinity for warm, soulful, deep and genuine musicianship. When have you last heard a studio album so alive, fleshly, organic and solid at the same time? It captures the feel of a live recording but without any flaws due to poor recording equipment or sound aesthetics.

The sessions at the legendary GDR Rundfunk Orchestra studios in East Berlin have also been filmed. Check out the accompanying video to “I Human” for some of its footage. With “Funkhaus Studio Sessions” Jazzanova will take you and their music to the next stage.