Smithsonian Folkways' tenth and final volume in their cutting-edge Music of Central Asia series dropped May 29, 2012. Featuring unprecedented collaborations with Chinese pipa master Wu Man and Northern Chinese Uyghur and Tajik traditional artists, this album is a testament to the unifying power 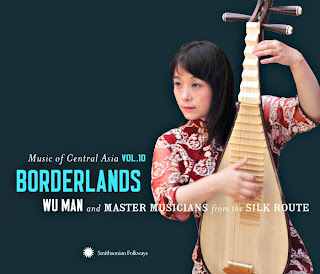 of music. Wu Man found unexpected common ground while playing with and learning from the many guest musicians on the album. There are many stories in this album, both from Wu Man, who's internationally known for her ground-breaking collaborations with classical music icons like Yo-Yo Ma, Philip Glass, Terry Riley, The Kronos Quartet, Tan Dun, and many more, and from the Northern Chinese and Tajik musicians with whom she's collaborating. True to the Music of Central Asia series, there's a very detailed booklet included with the album, as well as a DVD that features some short documentaries on the making of the album. It's quite the package!

Wu Man’s quest to understand the history of the pipa brought her to the Chinese borderlands of the Silk Route, a region of vast expanses of desert, mountains, and grasslands that for millennia have both linked and divided Chinese and Central Asian civilizations. At the heart of Borderlands are the musical traditions of the Uyghurs, whose homeland is the Xinjiang Uyghur Autonomous Region in the far northwest of China. Borderlands introduces three 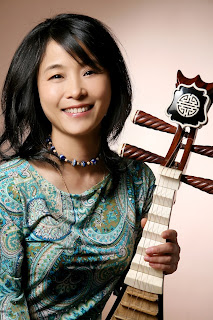 The new recording follows previous musical ventures by Wu Man that have seen her seek out little-known music tradition-bearers in far-flung regions of China and bring them to the attention of audiences in the west. She has also visited Central Asia and performed with Central Asian musicians in several earlier projects sponsored by the Aga Khan Music Initiative.

"These collaborations on Borderlands made my musical fantasy come true," says Wu Man. "I often imagined what it would be like if the pipa were mixed with instruments such as satar, tambur and dutar.  I was born in an urban city, Hong Zhou, in the east of China and the Islamic culture of the western part of China always fascinated me. As a little girl, I learned to sing many Uyghur songs

that had been translated into Chinese, and to me they always sounded mysterious and very charming."

Wu Man says the collaboration also meant connecting with and acknowledging the roots of her instrument:  "What is known in China as the pipa is one of the Central Asian instruments introduced to China through the Silk Route of the Uyghur region.  As a musician from China, I would be embarrassed if I did not make the effort to know Uyghur music and to work closely with master musicians from Xinjing."