Top Gun! The Musical Continues to June 29 in Toronto 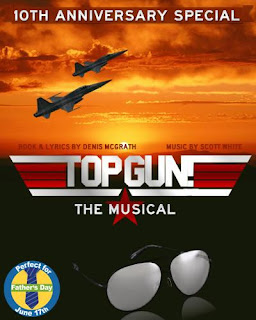 TORONTO - Singing. Satire. Subtext. All at Mach 3! If you see only one musical comedy about mounting a mega-musical based on the movie Top Gun, make it Top Gun! The Musical. You'll laugh. You'll hum. You'll believe a jet can fly!

For anyone who's ever cringed through Cats, felt the need for speed, or wondered "who thought that would be a good idea?", comes this new satirical musical. Writer Billy Palmer is about to crash and burn. His musical adaptation of Top Gun is going off the rails and he really needs a hit ... especially after the debacle of Apocalypse Wow!

Instead, he's saddled with a quarrelling cast, a shady ex-Navy SEAL producer, and a bit of bad luck. Now if only everyone would stop singing!

The 10th anniversary production of "Top Gun! The Musical", the most successful show in Toronto Fringe history, runs from June 8-29 and will appear on stage at the Lower Ossington Theatre, 100A Ossington Avenue.