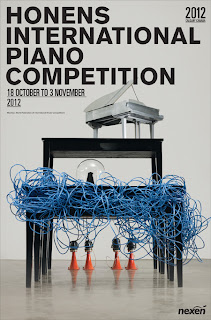 CALGARY, AB – One Canadian and one woman are among ten pianists chosen to advance to the Semifinals of Canada’s Honens International Piano Competition.  The pianists come from seven countries: Australia, Canada, China, Italy, South Korea, Russia and Ukraine.  One will be named the Honens Prize Laureate and win the world’s largest award of its kind – a $100,000 Enbridge Prize (cash) and an artistic and career development program valued at a half million dollars. The Semifinals and Finals of the Honens Competition, presented by Nexen Inc., take place in Calgary, October 17 to 26, 2012.

A Jury comprised of pianists William Aide and Benedetto Lupo, former Chairman of IMG Artists, Charles Hamlen, and Vancouver Recital Society Founder, Leila Getz, selected the ten pianists after a week of deliberations last month at The Banff Centre. The foursome reviewed 50 recitals and interviews that were recorded during the Honens Quarterfinals in Berlin, London, Los Angeles and New York.

“Our juries for 2012 include both musicians and individuals from the music business,” said Stephen McHolm, Honens’ President & Artistic Director, who also acts as Jury Facilitator. “This combination adds an important dimension in identifying the Complete Artist for whom we’ve always searched and a young artist that the larger music community will ultimately get behind.”

“I came away more convinced than ever that Honens is a unique competition, with far less emphasis in fact on the word ‘competition’ than on artistic excellence which is, clearly, the backbone and very definition of what it truly means to be associated with Honens,” remarked Juror Charles Hamlen.

Each Semifinalist performs two recitals (October 17 to 21): a 60-minute solo recital and a 70-minute collaborative concert with violinist Geoff Nuttall (of Canada’s acclaimed St Lawrence String Quartet), cellist Johannes Moser, and a singer (to be confirmed).  Five pianists will advance to the Finals (October 25 and 26) for performances with the Calgary Philharmonic Orchestra and its Music Director, Roberto Minczuk.  The Honens Prize Laureate and recipients of the Enbridge Prizes (cash awards) will be announced at an awards show following the Finals on October 26.

Tickets passports – offering significant discounts – are available now.  Single tickets, ranging from $10 to $85, are available starting August 7 from the Honens Box Office at (403) 299-0140 and online at honens.com.