Toronto - Artistic Director of April Productions, Dragana Varagic, who recently performed and directed a presentation of her acclaimed solo The Vindication of Senyora Clito Mestres at Theatre Passe Muraille, directs The Penelopiad by Margaret Atwood in a Canada / Montenegro co-production, which opened Saturday, July 28 as a highlight of the "Purgatorio" festival in Tivat on the Adriatic 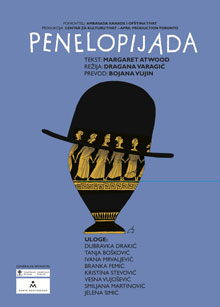 Coast. The Canadian Ambassador to Serbia, Macedonia and Montenegro in Belgrade is on the guest list for opening night as well as other dignitaries.

Toronto-based April Productions and the Tivat Cultural Centre (one of the most important presenters and producers in the region) are the co-producers of this play by one of Canada's most revered writers in a new translation by Serbian Bojana Vujin (who also translated Atwood's novel of the same name into the local language). The production uniquely connects Atwood's play with its original mythical Mediterranean setting.

The Penelopiad is Atwood's response to Homer's ancient epic Greek poem, The Odyssey. She tells the story from the point of view of Penelope, destined to spend eternity in Hades where she remains 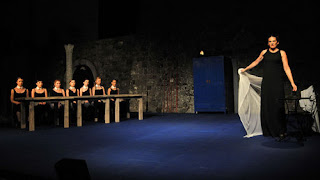 haunted by her twelve maids who her warrior-king husband Odysseus ordered murdered upon his return home after 20 years at battle, believing them to be disloyal.

Varagic takes her inspiration from Brecht for this production and  transports this contemporary Canadian play back to its Mediterranean roots and setting where it will be surrounded with an audience whose culture is firmly grounded in myths and legends, thereby allowing for an exciting resonance and echoing of the multiple layers of the play.

At the same time, it will introduce a modern and Canadian perspective on the importance of women's voices.

Produced with the support of the Canada Council International Program and under the patronage of the Canadian Embassy in Belgrade and the City of Tivat, general sponsorship for the co-production comes from Porto Montenegro, the biggest Canadian investment in the Balkans.