Montreal/Los Angeles-based Niyaz have recently released their third album, Sumud (pronounced soomood) and they are bringing it on tour to the United States this summer.   The album has already

debuted at #1 on the iTunes World Chart and broke into the top 10 Billboard World Music Chart as well.  The band will be kicking off their US tour on July 22nd in NYC then off to Atlantic City, Eugene, Los Angeles, Irvine, San Francisco, and Seattle.  Full tour dates below.

Niyaz, which means ‘yearning’ in Persian and Urdu, was formed in 2005 by Azam Ali, multi-instrumentalist Loga Ramin Torkian and two-time Grammy nominated producer and electronic musician Carmen Rizzo. The trio borrows from an historic lineage of Middle Eastern poets setting verse to music, while exploring the music and identity of Iranians living in exile and struggling to maintain their cultural identity in the modern world.

Their new album, Sumud (out now on Six Degrees Records) expandes on that theme, while adding their new experiences and worldviews learned during their heavy touring through the Middle East in the past seven years. ‘We have now travelled across the world, and those experiences have affected the journey that we are on and the direction we’ve taken on this album,’ Ali says from her new home 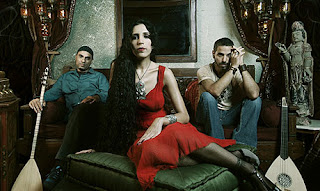 in Montreal. ‘We’ve performed in the Kurdish parts of Turkey during times of major conflicts, as well as other parts of the Middle East. Obviously that has affected this project. We wanted to focus on the ethnic and religious minority groups in these regions, because they have really struggled to maintain their identity. It started from us wanting to tell our story, and it has evolved into this humanitarian social message, embracing regions around Iran.’

In its short history, Niyaz has garnered an incredible amount of media attention, including features on NPR and PRI, with the Huffington Post declaring the band to be ‘an evolutionary force in contemporary Middle Eastern music.’ Their second album, Nine Heavens, topped both the iTunes World and CMJ World Music charts, while a number of songs from the two-disc set found their way onto television and the big screen. Tireless performers, Niyaz continues to tourinternationally, while 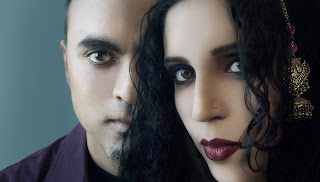 each member has released at least one solo album since Nine Heavens’ 2008 release.

In an age where conflict regions are tearing up areas of the Middle East, as well as completely fracturing the understanding of Arabic culture in America, Niyaz is presenting the most groundbreaking marriage of ancient, ecstatic verse with 21st-century dancefloor kinetics. Their music applies to every global citizen, however, not only those with Persian blood flowing in their veins. As Rizzo explains, the human element is deep at work here.