Secret Stash Records is excited to announce their upcoming release: Pazy And The Black Hippies - Wa Ho Ha (out September 4th on Vinyl and CD). On September 4 we will be releasing Wa Ho Ha by Pazy And The Black Hippies. The first 300 copies come with limited edition green vinyl and 3-color green and yellow screen printed jackets. Each record will come wax sealed with the SSR logo in green wax! Once these are sold out, only the standard version with original artwork and black vinyl will be available. Our last pre-order, for Long Live Boogaloo, sold out in just over 36 hours, so don't snooze on this one! Pre-order now.

Since we know the world is soon to go crazy with Black Hippies fever we want to offer this new t-shirt to help represent. You can add this slick screen printed t-shirt to your pre-order of Wa Ho Ha for just $10. This will be a onetime limited edition printing!

While Reggae music had its prominence in 70s Nigeria, it was highlife and Fela Kuti's afrobeat that gave the country its own musical national identity. Originally from Southern Nigeria's Benin City, Edire "Pazy" 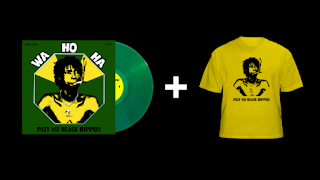 Etinagbedia and his band The Black Hippies released their second LP, Wa Ho Ha on EMI Nigeria in 1978 building on a body of work that effectively glides between these styles creating an incredibly unique record that has become a cult classic. Wa Ho Ha features Pazy and his Black Hippies engaged in call and response vocal anthems all backed by incredibly deep rock steady grooves and afrobeat rhythms filled with funky horns and psychedelic guitar accents. Recorded in the legendary EMI Nigeria studios, Wa Ho Ha typifies the 70s Nigerian sound enthusiasts the world over have come to know and love, but puts an inimitable twist on it.

rarity. This rare gem has been lovingly remastered and the original art work painstakingly restored. As always, the LP version includes a free digital download of the entire album.

For more details about the Pazy And The Black Hippies Pre-Order special, watch the video below: