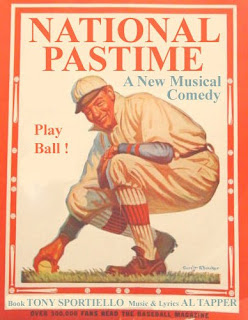 Peter Jay Sharp Theater at Playwrights Horizons in Manhattan (416 West 42nd Street). Presented by August Theater Productions in association with Algonquin Theater Productions, NATIONAL PASTIME has a book by Tony Sportiello and music and lyrics by Al Tapper. Nancy Robillard directs the show, which has musical direction by David Wolfson.  The musical will play a limited run through August 25th, 2012.  Tickets for NATIONAL PASTIME are $35.00 and are on sale now via TicketCentral.com (212-279-4200).

NATIONAL PASTIME tells the story of WZBQ, a radio station in 1933 Iowa that is on the verge of bankruptcy. To spark ratings, the folks at the station invent a fictional, unbeatable baseball team and begin to broadcast phony baseball games as though real. All works to perfection  . . . until the media begins to pay attention.

NATIONAL PASTIME originated in a reading that took place at the National Baseball Hall of Fame in Cooperstown, New York in May 2010.  NATIONAL PASTIME had its world premiere production in 2011 at the Keegan Theater in Washington, D.C.

Tony Sportiello is a playwright and lifetime baseball fan, which grew up idolizing the Baltimore Orioles.  In 1991 he wrote a one-act play entitled Contract Time, which was presented at the National Baseball Hall of Fame in Cooperstown.  He was inspired to write a full length for the Hall of Fame, which became 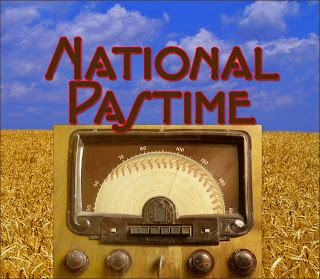 Al Tapper composed the ballet The Seduction of Bathsheba, whose premiere performance at Mechanics Hall was presented by the Central Massachusetts Symphony Orchestra 1988. Mr. Tapper’s five musicals have also garnered success throughout the years opening in various cities on the eastern seaboard. His off-Broadway musical, ImPerfect Chemistry, for which he composed the music and created the story, opened at the Minetta Lane Theater in New York City in April of 2000. His musical Sessions ran Off Broadway for over 400 performances. He wrote the musical An Evening at the Carlyle, which ran at The Algonquin Theater and was reviewed as “Best Show of the summer”… 2010 by UPI. Mr. Tapper is a member of the Dramatists' Guild of America and a member of ASCAP.

NATIONAL PASTIME will play a limited run at the Peter Jay Sharp Theater at Playwrights Horizons in Manhattan (416 West 42nd Street) from August 8th - 25th, 2012.  The performance schedule for NATIONAL PASTIME is as follows:

We Are America - from the musical comedy NATIONAL PASTIME from Pierre Weidemann on Vimeo.
musical theatre new york theatrical premiere off broadway plays about baseball plays about sports theatre in new york city