From A-Z Films: And If We All Lived Together? Opens in Toronto Aug 17

A-Z FILMS presents
And If We All Lived Together?
(Et si on vivait tous ensemble?)
A film by Stéphane Robelin 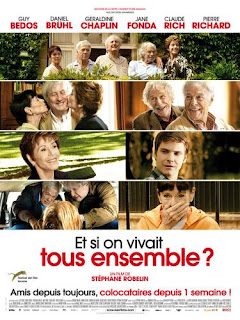 (Toronto)  And If We All Lived Together? is a beautiful adventure that revolves around a group of aging friends, who at 75 - in order to avoid retirement homes - resolve to live together, bringing with it the tragic and comic aspects of the communal life they have chosen.

Opening in Toronto, on August 17, at The Varsity + Cineplex Odeon Sheppard Cinemas, followed by Vancouver on August 24, then Montreal on September 21, and then Ottawa on October 12.

And If We All lived Together? will showcase some of cinema’s most legendary actors, such as Jane Fonda – who is fluent in French and makes her return to French cinema after almost 40 years - 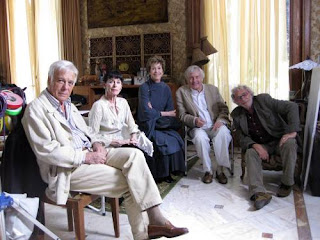 alongside the well-respected humorist Guy Bedos and Claude Riche, and comic Pierre Richard, and the incomparable Geraldine Chaplin.

Annie, Jean, Claude, Albert and Jeanne have been the best of friends for forty years. So when the memory starts wavering, the hearts starts fluttering and the spectre of the retirement home rears its dismal head, they friends rebel, and decide to set up their own house together. A foolish scheme, apparently. But even though their new togetherness creates friction and revives old memories, it is the beginning of a wonderful adventure – house-sharing at 75!

“I always dreamed of bringing legendary actors together in an ensemble film dealing with family and friendship,” says director Stéphane Robelin. “I was particularly interested in the social issue of dependency and the elderly, which is rarely explored in cinema. When I started writing the screenplay, I remembered my great-grandparents declining in health and my grandparents didn’t know how to care for them, they hadn’t been prepared for that situation. So I was inspired to write a story about a group of aging friends who decide to live together.”

Robelin started filmmaking in the 1990s, writing and directing short films. Later he began working in the field of TV documentaries, mainly for the national French TV station, France 2. His feature debut Real Movie (2004) premiered at the Dashanzi Underground French Film Festival in Peking. And if we all lived together?  is his second film.