A window into the Caribbean at the 7th Annual CaribbeanTales Film Festival
Continues to September 15, 2012

CaribbeanTales Film Festival invites you to go island-hopping at the movies and experience the creativity of Canadian and Caribbean diaspora filmmakers at Harbourfront Centre from Sept. 4 – 15, 2012.

TORONTO - After seven years, the festival is expanding to great lengths. The Incubator Program, supported by Telefilm Canada, will showcase 30 filmmakers and mentors from all over the world who

are connected by their ideas about Caribbean identity. “These are the films that will win awards globally next year,” say CaribbeanTales CEO Frances-Anne Solomon. “Ian Harnarine’s Doubles With Slight Pepper which won Best Short at the Toronto International Film Festival and a Genie Award, after participating in CaribbeanTales 2010 Incubator Program.”

“This year, we received over 100 amazing film submissions,” says Solomon. “What I’m looking for is authenticity; a truth about who we are as Caribbean people. What touches audiences is truth, so the films we screen need to contribute to our shared understanding and a dialogue about what it means to be Caribbean.”

For the first time, CaribbeanTales is actively inviting youth participation with the 48hr Film Challenge. Targeted at Toronto’s priority neighbourhoods, filmmakers are divided into teams and have 48 hours to

make a five-minute film. “Participants can use any medium, so we expect to see a lot of variety, ranging from semi-pro productions to films shot on cell phones. All the films delivered by the deadline will be shown during the festival,” says actor and activist Michael Miller, the coordinator of this year’s 48hr Film Challenge.

Movie-goers can expect to see eight feature films and 16 short films that were selected for screening at Harbourfront Centre’s Studio Theatre. This year, organizers have branched out to include a variety of film perspectives including two films showcasing Haiti today and a spotlight on the LGBTQ community with the program Queer Caribbean featuring Stud Life – the first feature film from Britain’s Campbell X.


CaribbeanTales is also looking at developments in Caribbean Web Series with the world premiere of Rodney Smith’s The Accidental Time Traveller and will host the world premiere of Antiguan filmmaker Melissa Gomez’s compelling autobiographical documentary Silent Voices, a film about growing up with deaf parents. The festival will also feature many Canadian premieres as well as films from the UK, US,

“Marc Barrat’s Orpailleur is a must-see film along with Leticia Tonos’ award-winning La Hija Natural – which is quickly becoming a classic of our time.  So much excellent work is exploding from the Caribbean right now!” says Solomon. “And don’t forget Santana,” she laughs referring to the Trinidadian puppet show that got one million views on YouTube before being turned into a movie, selling out cinemas on the island for a month.

The festival’s opening-night film, The Story of Lover’s Rock, is a documentary that uses music to understand the journey of Caribbean people arriving in England in the seventies. “It’s a story I personally identify with because I came of age in Britain. It was a time when the streets were not safe 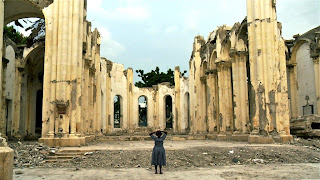 and our parents had no idea what we were dealing with. Lovers Rock was a release for young Caribbean Brits and was opportunity to explore intimacy through music and dance,” says Solomon.

For additional information and complete event listings, the public may visit harbourfrontcentre.com/summer or call the Information Hotline at  416-973-4000 . Harbourfront Centre is located at 235 Queens Quay West in the heart of downtown Toronto’s waterfront.