SUPER HI-FI’S DEBUT ALBUM, DUB TO THE BONE IS A SOUNDTRACK THROUGH TROMBONES, SUBWAYS, AND ECHOPLEXES
OUT DECEMBER 4, 2012 ON ELECTRIC COWBELL RECORDS
WITH FALL/WINTER LIVE DATES

You might not associate the trombone with the classic dub reggae sounds of Lee “Scratch” Perry, King Tubby, and Scientist. Super Hi-Fi, the Brooklyn-based ‘Afro-Dub’ band led by songwriter-producer- 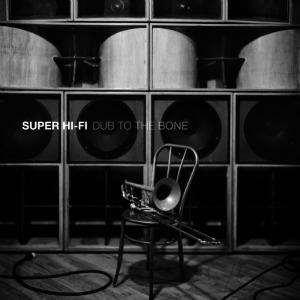 bassist Ezra Gale, is about to change that.  Dub To The Bone, the band’s debut album, uses not one but two trombones to create sonic tapestries drenched in the warmth of analog tape. “Trombones are like violas,” says Gale. “They’ve always been under-appreciated instruments and even the butt of a lot of band jokes.  But when you blend the tones of two trombones with the space of dub you get a deep, full sound that is both soothing and striking.”

The album’s imagery is as striking as the music. The album cover- an antique-looking photo of a trombone on a chair in front of a massive stack of speakers- conjures the modern-retro vibe that embodies Super Hi-Fi.  Gale elaborates, “The cover art and design reflects the music by using vintage/antique/analog media to express new content. Kevin Irby, using his 1908 camera, took the photos from the album shoot.  The stack of speakers in the background belong to my friend Quoc Pham from the Sound Liberation Front.  They’re this gigantic tower of soundsystem speakers he’s been building himself over the last year.”


Pham’s house was not only the location of the photo shoot, but also the birthplace of Super Hi-Fi back in 2010, when Pham asked Gale to put a band together for a house party. The pair’s production company, the Sound Liberation Front, then hosted the popular “Afro-Dub Sessions” monthly party at the now-defunct Rose Live Music venue in Williamsburg, Brooklyn. The gathering featured Super Hi-Fi as the house band joined by an array of top-flight DJ’s and producers- some of whom, like 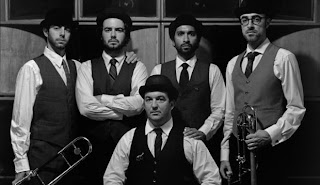 Victor Rice, Subatomic Sound System, and the Beverley Road All-Stars- are featured with remixes on Dub To The Bone. That party’s mix of African and Jamaican sounds is reflected in the band’s name, with “super” a popular word for African bands and “Hi-Fi” representing Jamaican soundsystem culture.

African music and specifically Afrobeat is no stranger to Gale, who founded and released four critically-acclaimed albums with his band Aphrodesia that were rooted in traditional Afrobeat (with such high reverence that the band traveled to Nigeria and played at Femi Kuti’s Shrine), but with a modern signature sound that was all their own.  Similar to Aphrodesia, Super Hi-Fi respects the influence and legends of Dub music greats, but adds their own unique take. Recorded onto analog tape by noted dub engineer Prince Polo, the classic dub sound shines through with the use of vintage tape delays like the Echoplex, the Space Echo and others, but the music, all composed by Gale, is new. Dub To The Bone mixes original tracks with remixes, reflecting the malleable nature of dub. “Dub music is all about re-forming original recordings into something different,” says Gale, “so the remixes here have their own identity and can stand on their own.”