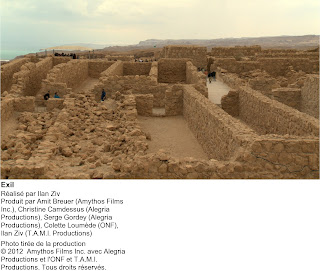 National Film Board of Canada
Exile: A Myth Unearthed Toronto theatrical engagement
at the Projection Booth Cinema to December 20, 2012

Toronto – Ilan Ziv’s Exile: A Myth Unearthed, a documentary that examines the Jewish exile through the lenses of archaeology, history, myth and religion, screens at Toronto’s Projection Booth East starting December 7, with the director in attendance via Skype for a Q&A December 9. Produced by Amythos Media Inc., Alegria Productions and T.A.M.I. Productions in co-production with the National Film Board of Canada (NFB), the film will also be available in video-on-demand and download-to-own formats at NFB.ca starting January 29. 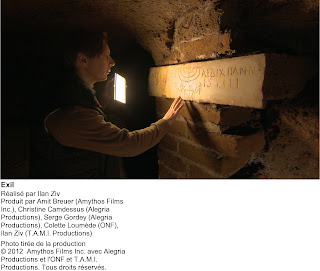 About the film
The exile of the Jews following the destruction of the Second Temple in 70 AD has played a principal role in the Christian and Jewish traditions. But what if it never happened? That is the central question raised by Exile: A Myth Unearthed, which travels from Sepphoris to Masada, from Jerusalem to the catacombs of Rome in its investigation, and features interviews with leading historians and archaeologists such as Zeev Weiss and Seth Schwartz. The film also follows a group of tourists in Israel who hear the traditional interpretation of events such as the siege of Masada—an interpretation that stands in sharp contrast to recent evidence.

Exile - A Myth Unearthed by Ilan Ziv, National Film Board of Canada