THE CHARGE OF THE EXPORMIDABLE MOOSE
May 10-26, 2013 in Toronto
English Language World Premiere of Quebec Playwright’s Masterpiece

"Toronto's enterprising One Little Goat Theatre Company” (New York Times) presents the English language world premiere of The Charge of the Expormidable Moose by Claude Gauvreau. Considered a "giant" and 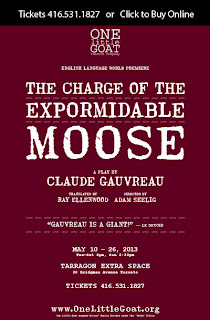 "revolutionary" of Quebec theatre (Le Devoir), Gauvreau is little known outside his native province. Gauvreau's provocative seven-person play, widely considered to be his masterpiece, is translated by Ray Ellenwood and directed by One Little Goat’s Artistic Director, Adam Seelig.

The design team for One Little Goat’s largest production to date boasts over a dozen Dora awards and nominations collectively:  Jackie Chau, sets and costumes; Laird MacDonald, lighting; and Thomas Ryder Payne, sound. The seven-person cast will be announced in the spring.

Claude Gauvreau (1925-1971)
Revered in Quebec as a visionary poet-playwright, an original contributor to the 1948 Refus Global manifesto by Montreal's radical Automatistes, admired by director Robert Lepage and performance poets The Four Horsemen, Claude Gauvreau is an artistic force. His innovative use of language, which he called "explorean", tested the very limits of lyricism. Overwhelmed by the suicide of his love and muse (performer Muriel Guilbault), Gauvreau experienced continual psychiatric treatment until, in 1971, he ended his life. 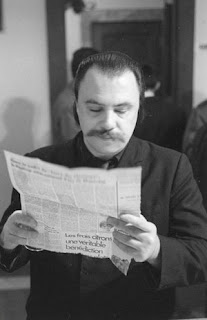 The Charge of the Expormidable Moose revolves around a poet who is envied, mocked and ultimately sacrificed by his fellow housemates (or are they fellow inmates?).  Playful and surreal, yet deeply rooted in powerful experiences, The Charge of the Expormidable Moose combines the absurdity of Ionesco with the cruelty of Artaud to create an exceptional drama.

One Little Goat, North America’s only company devoted to contemporary poetic theatre, “has done audiences a huge service” (Toronto Star) through its highly interpretive, provocative approach to international plays. The company's Canadian and world premieres have garnered praise from the New York Times, Globe and Mail, Economist, Now and others. More information on the company is available on Wikipedia and at www.OneLittleGoat.org.