Tracey Erin Smith's SoulOTheatre announces
A Window on the SoulO
a theatrical installation for its first-ever
SoulOTheatre Festival - May 23 to 26, 2013
With 7 top performer/playwrights from North America including
Chris Gibbs and Precious Chong! 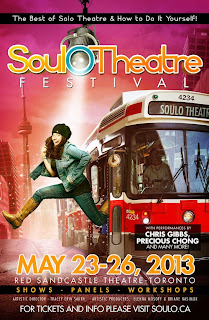 Toronto - Artistic Director Tracey Erin Smith announces a new theatrical installation for the SoulOTheatre Festival, which runs May 23-26 at the Red Sandcastle Theatre in Toronto's Leslieville.

A Window on the SoulO puts everyone in the spotlight! For the duration of the festival, A Window on the Soulo will feature surprise appearances from festival performers along with SoulOTheatre graduates and students who all will take turns sitting for an hour at a time, writing in the store front, Queen Street window of the Red Sandcastle Theatre.

Observers and passersby will be invited to fill out and hold up cards to the window asking the artists to answer a specific question or suggest a topic for their writing.

Precious Chong, whose world premiere of Precious, like the Adjective closes the festival, will be in the window on May 23 from 7pm-8pm, just prior to the Gala Opening of the festival (Chris Gibbs' Antoine Feval).

The other mainstage productions showcasing the mighty art form of the one-person show include the Canadian premiere of Beowulf or Gilgamesh, You Decide! from Charlie Bethel, and showstoppers SoulOTheatre's inaugural SoulOTheatre Festival includes some of the best solo performers from Canada and the United States. Smith, along with Artistic Producers Elenna Mosoff and Briane Nasimok, has scheduled four jam-packed days and evenings of hilarious, moving, innovative and provocative solo shows, along with workshops and panels covering everything a performer or prospective performer needs to know about putting on a one-person show.

SAVE WITH A FESTIVAL PASS!
Full festival Pass: $90
A Festival Pass gives access to all shows, panels, and workshops (except for Opening Night Show/Gala & The Master Class)