• Check us out today and submit via Withoutabox!

LOS ANGELES, NEW YORK, & LONDON 2013 RECAP:
United Film Festival recently wrapped the first three cities of our 2013 season - and what a great three cities they were!

In Los Angeles, we had one of our best years ever and honored legendary-director John Landis with a Lifetime Achievement Award on our closing night.   The award presentation took place at the historic Vista Theatre where Mr. Landis also had his handprints enshrined in cement prior to a screening of Animal House.

New York featured a series of great screenings including the documentary Play Until Your Fingers Bleed, which reunited the band, Kleen Kut, for the first time in many years!

London had us across-the-pond once again and featured the captivating documentary The Promoter. The charismatic subject of the film, Robert Pereno, was even in attendance for this packed house screening! 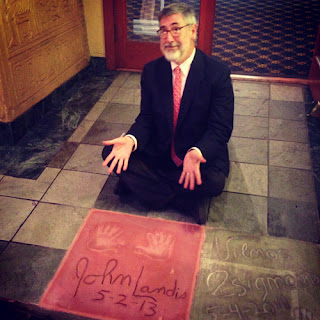 UNITED FILMS LAUNCHES NEW DIGITAL CHANNEL:
United Films recently launched a brand-new digital channel where you can see your favorite films from us in one convenient, easy-to-use place.

• CHECK IT OUT NOW

BONUS MATERIALS & EXPERIENCES:
The best part about our new channel, via Chill.com, is that you have several unique ways to watch the films! We put together bundle packages that cater to the viewer. Options range from streaming AND downloading the movies for one sweet price, to special packages never before available. All of these options are fresh, new and exciting ways for you to engage this films and enhance your overall movie watching experience. You can even Skype with the filmmakers!

A taste of previous festivals: