on September 06, 2013
With material from a media release:

It's a shame it took me all summer to have the time to give a proper listen to Three Mountain Pass, the debut release of Vietnamese born/California-based Van-Anh Vanessa Vo. Van-Anh plays traditional

instruments like 16-string danTranh—a zither with moveable bridges and the springy, bending tones resembling the koto—and the pitch-bending monochord danBau. She also plays the đàn tam thap luc 36-string hammered dulcimer, the đàn T'rung bamboo xylophone, the klông pút, traditional trong drums, and Chinese guzheng. Her mastery of so many traditional instruments is rare and she truly seems to play from the heart of each instrument.

The music is rhythmically compelling - it weaves a story through the notes; a walk in mysterious woods or whatever the imagination can conjure up. She sets an 18th century poem adapted from the Ho Xuan Huong to the music of a newly invented instrument (the Hang) in the title track and does a version of Satie's Gnossiennes you may not recognize.

Finding the freedom and well of feeling in long-standing forms and age-old instruments comes naturally to Vo, who grew up surrounded by a near cacophony of different music, streaming from the windows and 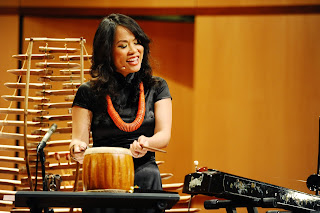 apartments of her childhood neighborhood in Hanoi.

Vo’s father worked as a musician to keep up morale in the North Vietnamese army during the war, accompanying himself on the guitar. Her family was eventually given housing in Hanoi’s remarkable artists’ quarter, where musicians lived choc-a-bloc and a dozen different genres and traditions entwined. 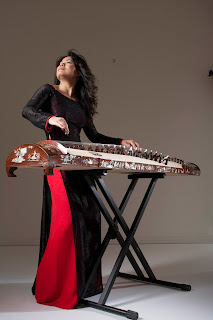 thought it was very inspirational.”

The Kronos Quartet contributes to Green  River Delta, a piece that seamlessly twists the various stringed instruments from East to West into a vibrantly layered sonic exploration.

The music is quite hypnotic in nature, the notes of the stringed instruments in particular so malleable they can express a range of emotion in a single wavering note.

As an instrumentalist and composer Van-Anh Vanessa Vo knows where the soul of her music lies: in her left hand.

“It brings out all the colours, everything you want to hear, the bending and sliding notes. Otherwise, with just the right hand, the melody feels so dry,” explains Vo. “The right hand is the father who sired me, but the left hand is my mother who raised me.”