FIGHTING FOR THEIR FUTURE: AN INSPIRING LOOK
AT THE "SHANNEN'S DREAM" CHILDREN'S CAMPAIGN

• Tickets here
Toronto - Though young Shannen Koostachin died tragically in 2010, her dream did not. 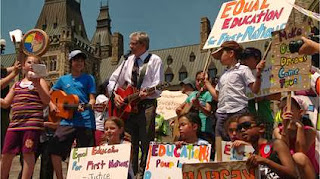 In 2008, Shannen was a 14-year-old student in the Northern Ontario Cree village of Attawapiskat, leading a campaign for a proper school in her community - a community that was stunned when she was killed in a car accident.

But children were determined to continue her fight; and so "Shannen's Dream" would grow into a remarkable national movement that called for fairness in education for all.

Legendary filmmaker Alanis Obomsawin's latest National Film Board of Canada (NFB) documentary Hi-Ho Mistahey!, which opens theatrically at TIFF Bell Lightbox on Friday, November 1, follows Shannen's Dream as it brings together the voices of those calling for better First Nations schools across Canada - taking their campaign all the way to the United Nations. Obomsawin will attend on November 1 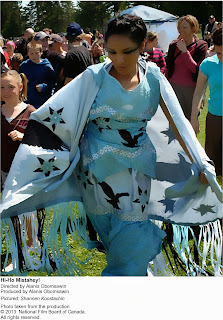 and 2 for introductions and post-screening Q&As.

With Hi-Ho Mistahey!, Canada's pre-eminent Aboriginal filmmaker has once again turned her lens on the Attawapiskat First Nation, whose housing crisis was the focus of her 2012 NFB documentary The People of the Kattawapiskak River. Hi-Ho Mistahey! was produced by Alanis Obomsawin and executive produced by Ravida Din.

At its world premiere at the Toronto International Film Festival earlier this fall, Hi-Ho Mistahey! was runner-up for the People's Choice Documentary Award. It also played to a packed house at the imagineNATIVE Film + Media Arts Festival, with Torontoist film critic Angelo Muredda calling the film "intelligent and moving ­ - capturing the emotional highs and lows along the way as ordinary children become active agents in the fight for their rights and educational futures."