• To apply and for more information, applicants are asked to visit  www.glenfiddich.com/ca/artistsinresidence

Toronto, November 28, 2013 – Glenfiddich is issuing a Call to Artists currently living and creating art in Canada to enter the internationally renowned competition for the prestigious 2014 Glenfiddich Artists in

The Canadian winner will be one of only eight artists worldwide to be awarded the art community’s coveted prize to live and work at the Glenfiddich Distillery in Dufftown, Scotland. It’s only fitting that the world’s most awarded single malt Scotch whisky honours distinction. The three-month residency valued at $20,000 per artist represents the Glenfiddich commitment to the pioneering spirit of the arts and the communities it serves. While living in crofts (traditional small Scottish farm houses), artists are encouraged to find inspiration from the unique setting in the Scottish Highlands. The experience provides an opportunity unlike any other for artists to work in an international community, share in a dialogue with other artists and foster cross-disciplinary ideas.

Now in its 12th year internationally and 10th in Canada, the Glenfiddich Artists in Residence Prize attracts nearly 150 submissions across Canada from the visual arts. The prize covers the cost of travel, living expenses and materials throughout the residency. From the submissions, five jury members choose eight finalists and ultimately one winner.

The distinguished jury for the selection of the Canadian Glenfiddich Artists in Residence Prize includes, Dr. Sara Diamond, president of OCAD University, Gaetane Verna, director of The Power Plant, Kitty Scott, curator of modern and contemporary art at AGO, Julian Sleath, programming manager of special events, economic development & culture at the City of Toronto, and the Canadian 2008 Glenfiddich Artists in Residence Prize recipient, Dave Dyment.

Andy Fairgrieve, curator, Glenfiddich Artists in Residence Prize underscores that, “The program’s ethos is about encouraging people to take inspiration from their experience living at the distillery, whether that be the pioneering heritage of Glenfiddich, the surrounding environment, or the daily life of the distillery and local xommunity, and to be as pioneering as possible – a mission our artists live and breathe during their three-month residency.”

The Glenfiddich Artists in Residence Prize has sponsored over 90 artists globally since its inception in 2002. Daniel Barrow, the 2013 Canadian Glenfiddich Artists in Residence Prize recipient – recognized for his use of obsolete technologies to present written, pictorial and cinematic narratives on the practices of drawing and collecting – has recently completed his three-month residency. 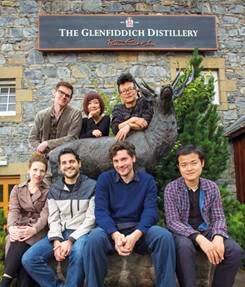 Barrow is the winner of the 2010 Sobey Art Award and is represented by Jessica Bradley Art + Projects, Toronto. He uses obsolete technologies to present written, pictorial and cinematic narratives centering on the practices of drawing and collecting. Since 1993, he has created and adapted comic book narratives to "manual" forms of animation by projecting, layering and manipulating drawings on overhead projectors.
Barrow’s performance work expands upon dualistic, universal themes: good vs. evil, shame vs. pride, experience vs. innocence, and the balancing of one's belief in miracles with an increasingly bleak and rapidly advancing future. All of his work aims to collide popular imagery from the cultural and digital past with emotional, usually melancholic, content. In doing so, he attempts a return to a former, primitive or nostalgic experience of stimulus.

"At the Glenfiddich Distillery, I will create a new performance in which projected silhouettes, drawings and photographs combine to tell a story inspired by the landscape, the community, or perhaps the distillery itself," he says.