Toronto ― The National Film Board of Canada selection at the 14th Planet in Focus Environmental Film Festival in Toronto (November 21–24) will include Jason Young’s documentary Bad Coyote, on the 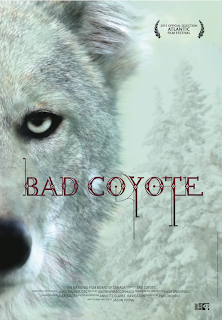 controversy surrounding a new hybrid species of wolf and coyote. The film is an incisive look at the politics—and the price—of living and playing close to nature.

Bad Coyote
Written and directed by Jason Young and produced by Paul McNeill for NFB Atlantic Centre in Halifax, Bad Coyote looks at a hybrid type of coyote, thought to be part wolf, which has migrated to Eastern Canada. After a deadly mauling in Cape Breton, said to be the first such fatal attack against an adult human, alarm spreads across Nova Scotia. Trappers, scientists, sheep farmers and the mother of the 19-year-old victim, Taylor Mitchell, weigh in. Increasing media coverage and reports of coyote attacks and sightings prompt the provincial government to issue a controversial bounty for dead coyotes. To some, the only good coyote is a dead one. But others call for a more measured approach, seeking mutual respect between humans and animals.

• Bad Coyote is screening November 24 at 2:10 pm at the TIFF Bell Lightbox, Cinema 1.
• Check out the Planet in Focus Film Festival Here