• Check out a preview of the CD here
• Buy it here
• For tour dates, check the link
• Free download of Beer Drinking Polka

In the world of accordion-driven Texas-Mexican conjunto music, Leonardo “Flaco” Jiménez and Max Baca are at once pillars of the past and forgers of the future. Legends and Legacies spotlights these GRAMMY 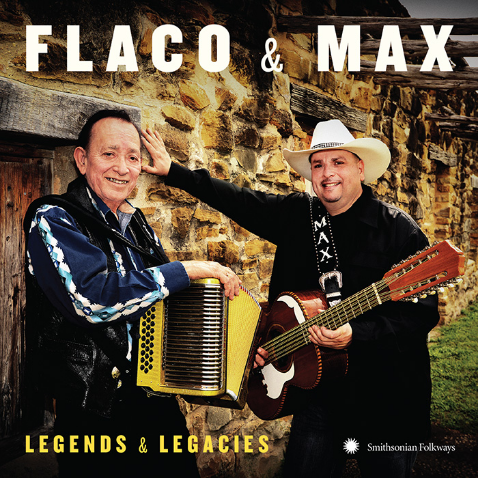 award-winning artists, each an inheritor of a musical legacy from his father and grandfather, and each a dynamic force of musical genius.

For more than 60 years, Flaco has pioneered the three-row button accordion, earning five GRAMMYs along the way, and ever since Max, 28 years his junior, joined him on the bajo sexto guitar, the duo has cultivated a larger-than-life reputation both on and off the stage. On February 25, 2014, Smithsonian Folkways will release 'Flaco & Max: Legends & Legacies,' a new album featuring Flaco and Max's interpretations of the best of the conjunto repertoire.

With accordion and the deep-pitched bajo sexto front-and-center, electric bass and drum kit supporting, and lyrics that are down-to-earth and often funny, conjunto ranges from fast-paced polkas (canción-polca) to slower, Mexican-style country songs (canción-ranchera). 'Flaco & Max' showcases the full breadth of the genre. Each an inheritor of a musical legacy from his father and grandfather, Flaco and Max chose the repertoire they consider most important to their respective musical paths for the album.

On the boisterous canción-polca "Cada Vez Que Cae La Tarde" — composed by Flaco's father, Santiago Jiménez, Sr. — Flaco and Max sing as a solid duo during the verses, and in between they trade zippy, virtuosic riffs. Other selections on the album were written by Flaco (“Fiesta alegre,” Joyful Fiesta) or were taught to Flaco and Max by their fathers ("Me voy lejos").

Born in 1939 into a line of pioneering Tejano accordionists, Flaco has won GRAMMYs for his own recordings and for albums with the Texas Tornados. He's also recorded with artists including The Rolling Stones, Dwight Yoakam and Ry Cooder. 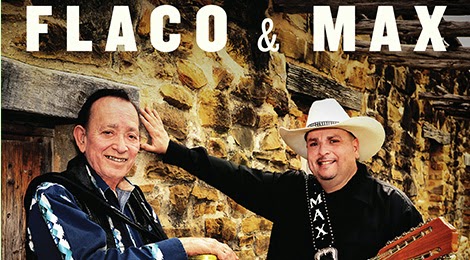 Max was 7 when he met Flaco at a concert; 20 years later, he became his bajo sexto player. Flaco brought Max into the Texas Tornados, whose combination of country, rock and conjunto has inspired Max's Los Texmaniacs. The band's 2009 Smithsonian Folkways album 'Borders y Bailes' won a GRAMMY, and its 2012 album 'Texas Towns & Tex-Mex Sounds' received a Latin GRAMMY nomination this year.

‘Flaco & Max: Legends and Legacies” is the 40th release in the Smithsonian Folkways Tradiciones/Traditions series since 2002. The series, a co-production with the Smithsonian Latino Center, showcases the diverse musical heritage of the 50 million Latinos living in the USA.