Part of the Unsound Festival New York City
April 5, 2014 at The Bunker

NEW YORK CITY - On Saturday night of Unsound Festival New York, The Bunker, who has partnered with the festival since its inception, will present an evening including a long overdue live appearance of the phenomenal dub techno duo Porter Ricks (Thomas Köner / Andy Mellwig). The duo were been brought back into the spotlight following the reissue of their rare but acclaimed 1996 debut 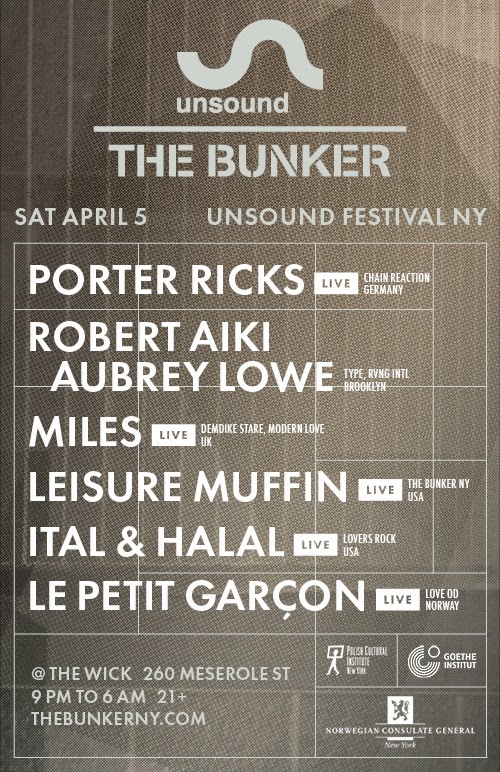 album "Biokinetics" (a Techno classic if there ever were one) on the Type label as their 100th release in late 2011 (the record was originally released on Basic Channel's Chain Reaction imprint). Porter Ricks came out of retirement especially to perform at Unsound Festival Krakow last October, so it seemed only fitting to bring them to New York this spring.

Appearing in place of Vladislav Delay, who cancelled his US tour, is acclaimed New York based electronic, drone, experimental producer Robert Aiki Aubrey Lowe (aka Lichens). Lowe's unique electronic music can be sampled on albums like "Timon Irnok Manta". Lowe has also been reaching new audiences far and wide via his lead performance in the new film "A Spell To Ward Off The Darkness".

Joining these titan of electronic music in delivering stunning live performance will be two homegrown Brooklyn based talents - fractured house renegade Ital (two acclaimed albums on Planet Mu) joined by shadowy producer Aurora Halal for the worldwide live debut performance as Ital & Halal, as well Leisure Muffin, fresh off the releasing the first ever 12" on The Bunker's new record label will perform his hard to pin down modular synth infected take on Kosmische music.

Looking back to Europe, Miles, one half of Demdike Stare, who also records solo works under the name will take to the decks for a unique DJ set and making his New York debut is another Norwegian addition to the festival, Le Petit Garcon, presenting his take on isolated Ambient Techno using a vast expanse of shoegazing guitars, synth harmonics and churning, ice-breaking bass.