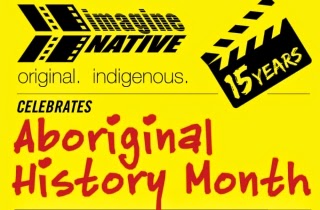 June 13: In co-presentation with the Bloor/Gladstone Toronto Public Library, the Festival Award Winner Shorts Programme will feature drama, comedy and documentary works from past festivals on themes of survival, strength and perseverance. The shorts will include Amaqqut Nunaat (The Country of Wolves - image below), Throat Song, Fighter, My Story, Le Reve D’Une Mere (A Mother’s Dream), Red Girl’s Reasoning, and Mohawk Midnight Runners, which will be followed by a Q&A with the film’s director, Zoe Hopkins.

June 19: In co-presentation with the Spadina/Bloor Toronto Public Library, the imagineNATIVE Youth Shorts Programme will showcase the best shorts by or about youth, which offer personal, traditional, comedic and inspiring perspectives from Canadian Indigenous artists. Titles include Wave A Red Flag, My Story, Nuu (Octopus Story), Ou Tu Va Toi?: Diane, Eagle vs. Sparrow, and Fusion. 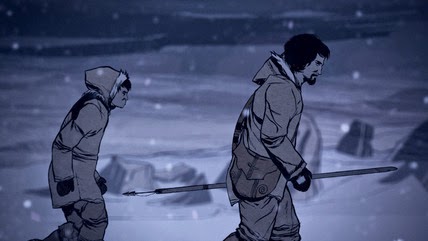 June 25: indigiFLIX will wrap up with indigiFLIX: Under The Stars, an initiative of the Regent Park Film Festival’s popular outdoor screening series, with a return screening of Empire of Dirt, the Canadian Screen Awards (CSA) Best Picture nominee by Peter Stebbings, produced by Jennifer Podemski and starring CSA-nominated actors Cara Gee and Jennifer Podemski.

June 21: imagineNATIVE, in partnership with TIFF, co-presents a special screening of Star Wars: Episode IV – A New Hope, fully translated into the Navajo language. Ats’ahoniyee’ nil holoo doo: May the force be with you!

The imagineNATIVE Film + Media Arts Festival is the world’s largest Indigenous media arts festival that celebrates the latest works by Indigenous peoples at the forefront of innovation in film, video, radio and new media. Each fall, the Festival presents a selection of the most compelling and distinctive Indigenous works from Canada and around the globe. The works accepted reflect the diversity of the world’s Indigenous nations and illustrate the vitality and excellence of Native art and culture in contemporary media. The 15th annual imagineNATIVE Film + Media Arts Festival will be held October 22-26, 2014.