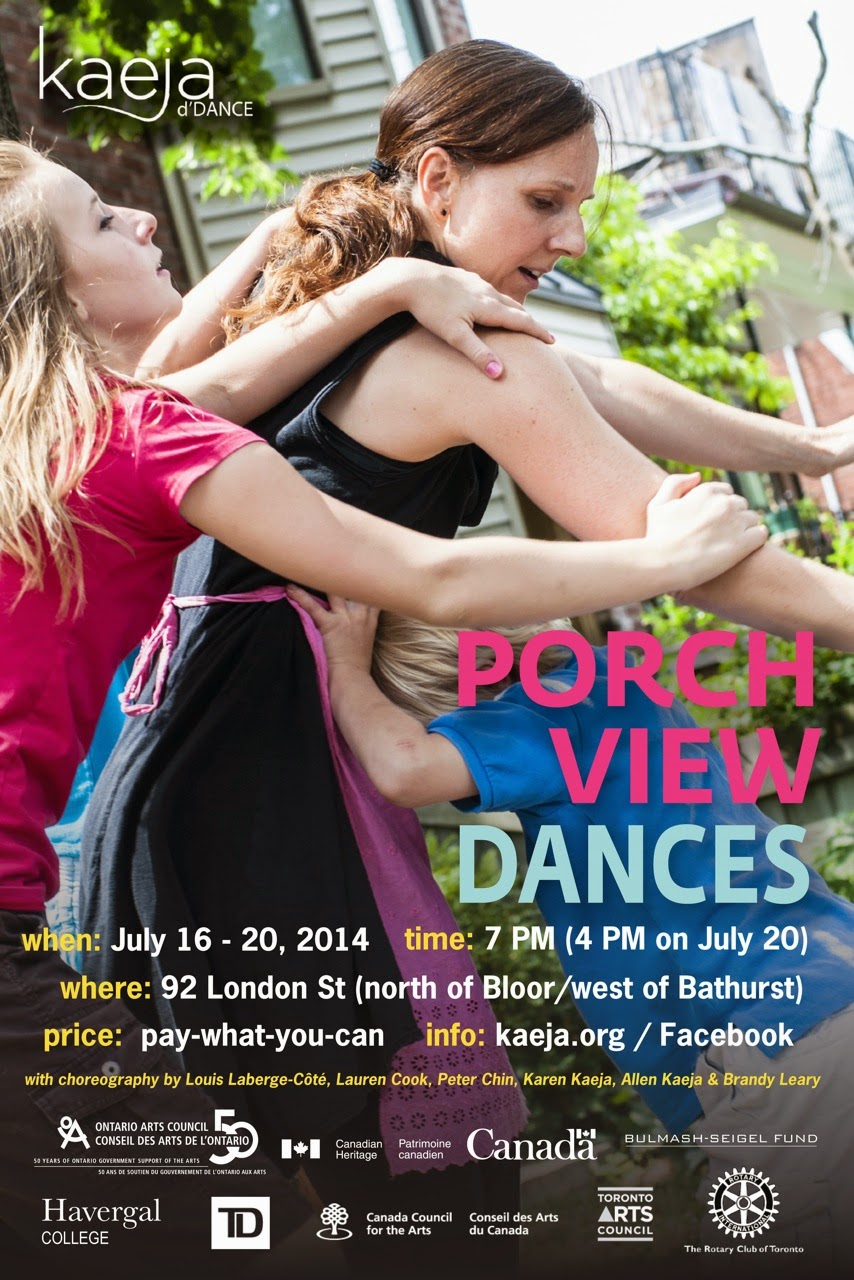 are all creating works for Porch View Dances which runs July 16-20 in Seaton Village in downtown Toronto.

An artistic and community initiative that shares the stories of everyday families' lives through dance on the porches and in the gardens of their own homes, Porch View Dance's inaugural 2012 presentation was named Best Site Specific Work by the Globe and Mail, and was bestowed the I love dance/J'aime la danse Community Award by the Canadian Dance Assembly.

Four award-winning choreographers - Peter Chin, Lauren Cook, Allen Kaeja and Louis Laberge-Côté (who this week just won the 2014 Dora Mavor Moore Award for Outstanding Choreography) - are partnering with four families (most of whom have never danced or performed in public before) residing in Seaton Village (West Annex) to create dance works that will animate the neighbourhood. (One of the four families participating in Porch View Dances is that of celebrated playwright Judith Thompson, recipient of two Governor General's Literary Awards, Officer in the Order of Canada and Queen Elizabeth II Diamond Jubilee Medal recipient.)

The evening begins at 7pm (except 4pm on Sunday, July 20) and continues through the neighbourhood, stopping at the four families' houses and ending at Vermont Square Park/St. Alban's Boys and Girls Club. Brandy Leary choreographs the vignette, 'pop up' dances along the route.

A unique and inclusive endeavour, Porch View Dances garners audiences of 300+ per evening, and turns the area's front porches, streets, alleyways and park into a stage, culminating in Karen Kaeja's celebratory, all-inclusive Flock Landing finale where members of the audience are invited to become active participants.
.
Engaging real people, in real time, in real spaces, Porch View Dances celebrates diversity, enhances community spirit and bridges the gap between youth, the elderly, and their communities - offering a vital model for future partnerships between public space and the arts.

"There is community outreach - and then there is Porch View Dances [Š] the poster child of how to do everything right." - Paula Citron, The Globe and Mail, 2012 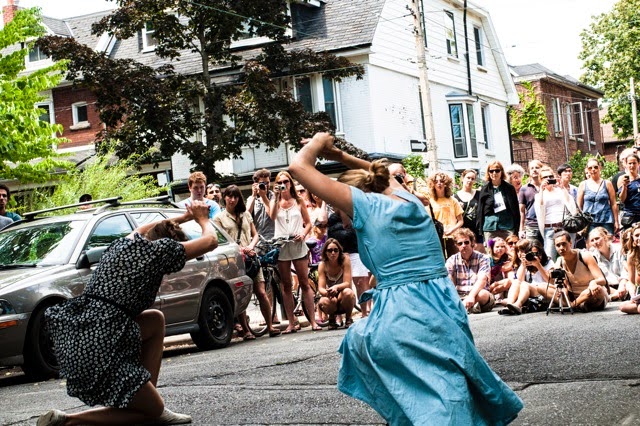 "Rarely has such ordinary public property been so wonderfully converted to artistic use. City sidewalks became seats for kids to watch, back alleys were opened up and became cultural corridors, and the local neighbourhood park was transformed into a performing arts centre. The boundary between what was public and what was private, what was ordinary and what was special, was danced into a beautiful blur." - Adam Vaughan, Former City Councillor, 2012

And Kaeja d'Dance has launched its first crowd-funding campaign to help with Porch with Projexity - a new local crowd-sourcing platform that focuses on improving our urban environments. Previous successful projects from Projexity have been a new public patio for the shipping container market at Scadding Court Community Centre and information kiosks for the Artscape Wychwood Barns. Kaeja d'Dance's Projexity campaign can be found at: https://projexity.com/porchviewdances#/ . All contributions are welcome and there is an exciting range of benefits and perks for investments over $10.

Kaeja d'Dance gratefully acknowledges the supporters of PVD: TD Bank Group, The Rotary Club of Toronto, Havergal College, The Department of Canadian Heritage, and our continued support from the Bulmash-Seigel Fund, the Canada Council for the Arts, The Ontario Arts Council, and the Toronto Arts Council.