STEPHEN HOUGH HAS THREE NEW RECORDINGS ON HYPERION,
TWO OF WHICH INCLUDE HIS OWN COMPOSITIONS,
TO BE RELEASED IN MAY AND JUNE 2015 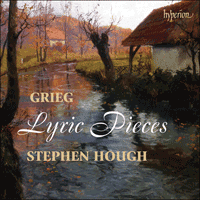 For his solo album of Grieg Lyric Pieces, Stephen Hough has programmed twenty-seven of the sixty-six brief musical tone-poems.  Grieg composed the first volume of Lyric Pieces, his Opus 12, in 1867, along with the tenth and last volume, his Opus 72, published in 1901. In addition to some of Grieg’s most famous music, including Wedding Day at Troldhaugen, Mr. Hough includes selections from the final Opus 72. 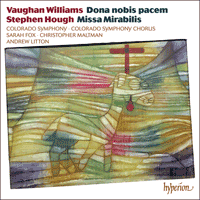 Mr. Hough says that giving his Mass the title “Mirabilis” (miraculous) is purely personal:
“I gathered a year’s-worth of sketches for the Mass together in September 2006 and wrote three of the movements in three days… the following day I had a serious car crash, overturning on the motorway at 80 mph; I stepped out of the one untouched door in my completely mangled car with my Mass manuscript and my body intact.  I was conscious, as I was somersaulting with screeching acrobatics on the highway… of feeling regret that I would never get to hear this piece.”  Of the remaining movements he sketched the Agnus Dei in St Mary’s Hospital, waiting for four hours for a brain scan. Gloria was written later. 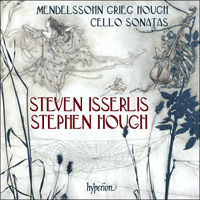 Hough’s own Sonata. Mr. Isserlis suggests that, although there are many differences between the three sonatas, there are also strong connections: “all of them are by pianist-composers; all require considerable virtuosity from both players; and, most significantly, all three works combine classical forms with a passionately romantic spirit.”

Mr. Hough’s Cello Sonata, which is scored for Cello and Piano left-hand, was composed at Mr. Isserlis’ request when a mutual friend, also a pianist, injured his right hand. The Sonata was co-commissioned by the U.K.’s Tetbury Music Festival and the Kronberg Festival in Germany. Mr. Hough and Mr. Isserlis premiered the Sonata in 2013. By employing only the left hand the piece takes on a “distinctive range of dark textures”. The Sonata in one continuous movement bears the subtitle ‘Les Adieux’ which Hough explains “underlines the melancholy spirit of the piece”.

Stephen Hough has released more than 50 recordings on 15 record labels, with works by more than 100 composers, including his own. He has won four Grammy nominations and eight Gramophone awards including two ‘Record of the Year’ awards—one for concertos by Scharwenka and Sauer and the other for the complete works for piano and orchestra by Saint-Saëns, which was also given the Gramophone ‘Gold Disc’ Award after being voted by readers of The Times as the finest classical recording of the last 30 years. His recording of the complete Chopin Waltzes received the Diapason d’Or de l’Année 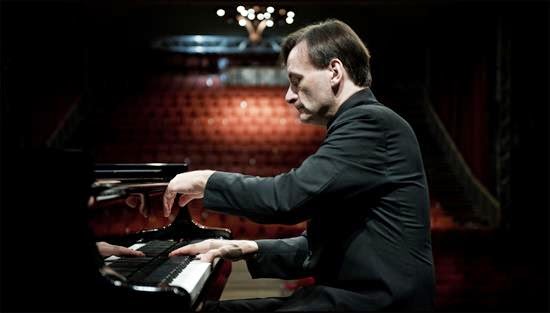 Stephen Hough was the first solo instrumentalist featured by the award-winning app publisher Touch Press on an iPad app launched in July 2013 on which he performs Liszt’s Piano Sonata in B minor. The New Yorker wrote that the app “is superbly put together, seamless, and intuitive, but it’s Hough that makes it special.”

Upcoming engagements in the 2015 season in the U.S. include orchestral performances with the Oregon Symphony, the San Diego Symphony, Edmonton Symphony, and the Omaha Symphony.  In recital, Stephen Hough can be heard in Carnegie Hall as part of the Keyboard Virtuoso Series on May 9 in a program of Debussy and Chopin; in the Celebrity Series, Boston on May 8, and on May 12 in San Francisco.

To find out more about Mr. Hough, please visit his website (http://www.stephenhough.com), his blog for The Telegraph, his Facebook fan page (facebook.com/houghhough), or his Twitter page (@houghhough).