Dusk Dances Returns to Toronto and Beyond 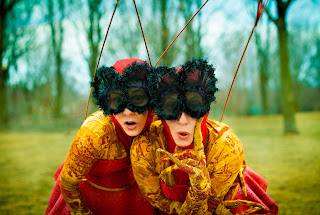 Over the weeklong Festival, four-10 minute pieces will be presented, plus the new addition of a final 30-minute work (evenings only) by renowned choreographer Tedd Robinson for Cloud 9. Founded by Sylvie Bouchard (Dusk Dances and BoucharDanse), Karen Kaeja (Kaeja d’Dance) and Claudia Moore (MOonhORsE Dance Theatre), Cloud 9 commissions choreographers to create masterful ensemble works for dancers over 45 years of age.

Each performance, hosted by the genial Brad Brackenridge who guides the audience around the site, begins with the Cuban sounds of Guaracha Y Son and a free outdoor Salsa class with master teacher Miko Sobriera. The Dance programme includes:

RECUERDOS speaks to the strength and fluidity of memories.  The cycle of life repeats itself and memories reoccur in the next generation.  History is providing a chance at redemption, a journey that can be heartbreaking or rewarding; a journey of discovery.  Premieres this year at Dusk Dances.

BELLA was inspired by the opera music of Puccini and a mutual love of Marc Chagall.  In 1977 Danny Grossman and Judy Jarvis set out to make a duet for themselves on top of, under and around a table. When Mary Kerr arrived to design the sets and costumes, she took her inspiration from the Chagall images they had been inspired by and created a beautiful painted horse as the centerpiece for this charming love duet.  First premiered at Dusk Dances 2007. 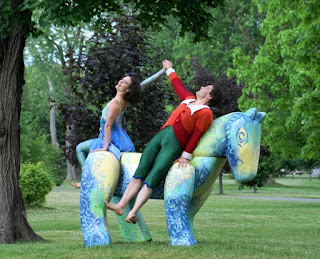 Twin fireflies get separated at birth. After a journey apart, they find each other again, in a cluster of trees, at Withrow Park. See how they grow to become photuris versicolor, or as they like to call themselves, "femmes fatales!"  World Premiere this year at Dusk Dances.

MURMURE DE FEMME / WOMAN’S WHISPER is an ode to femininity:
“Born to bear the weight of ceaseless adversities
I am she
Stalled in cyclic time
I remain – a woman
Rest your back against mine
Learn the rhythm of my breath
Listen carefully to every pulse in my veins
Memorize the cadence of my heart
In the flux of tempo and beats
We rise as one soul”

MOonhORsE Dance Theatre presents a Cloud 9 commission- DISCONCERTANTE - by award-winning choreographer Tedd Robinson, winner of the 2014 Walter Carsen Prize for Excellence in the Performing Arts. This 30-minute ensemble work to the music of Chopin is beautiful, magical, touching, comical, theatrical and captivating.
Premiered in June 2013 in partnership with Young Centre for the Performing Arts, premieres this year at Dusk Dances.
*Please note: Disconcertante will not be performed at the matinée performances