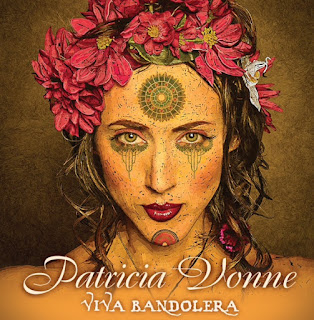 San Antonio, Texas has always been the musical and cultural crossroads of the Lone Star State, fusing the state’s modern Anglo-centric history with its centuries-old Latino past. Patricia Vonne is a product of this cultural menudo, growing up with the diverse blend of music in a family of ten wildly creative children- including her older brother, film director Robert Rodriquez. Through five albums, Vonne has found her own sound, harvesting a hybrid mix that has been interpreted as Texas border rock. Her latest album, titled Viva Bandolera, is a compilation of Spanish songs collected from her five previous albums that explore her experience as a Tejana. Out June 23rd on Bandolera Records, the album consists of 17 tracks including revised versions of “Severina” and the title track “Viva Bandolera.”

Growing up in the historic Monte Vista section of San Antonio, Vonne and her siblings were encouraged to forge their own creative paths. Her father, a native from Rio Grande Valley, came to San Antonio on a music scholarship and her mother, of Spanish descent, played guitar and sang Old World folksongs for her kids. The memories of Vonne’s mother giving her and her siblings exposure to these historical songs and styles has stuck with her throughout her life, and she expertly melds this influence with her own affection for rock ‘n’ roll. She counts Forth Worth rocker Johnny Reno and his band, the Sax Maniacs, as her first exposure to the decidedly American genre.

“Growing up as a Tejana, I listened to the diverse music of San Antonio—country, rock, jazz, pop, conjunto and Tejano styles,” she recalled. “When I started writing my own music, which is also a hybrid mix of sound and flavors, I felt a need to preserve and honor the rich cultural heritage of my upbringing.” 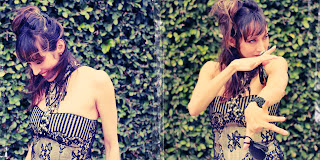 In 2001, Vonne relocated back to Texas from her temporary home of New York, settled in Austin and quickly became a standout attraction in a city of earnest singer-songwriters, indie upstarts and quirky iconoclasts. Vonne’s bilingual lyrics, flamenco dance moves and stage prowess left an undeniable impression on the Austin music fans and solidified her role in the live music scene. Vonne has garnered various accolades from the local music community, such as the Best Female Vocalist title at the Austin Music Awards in 2014. She also took an award home from the same ceremony that praised her dexterity with her signature instrument, the castanets. The statuesque singer has also collaborated with numerous Texas musical heavyweights such as Charlie Sexton, Rosie Flores, Flaco Jimenez, Alejandro Escovedo, Joe Ely and Doyle Bramhall. The Austin Chronicle has many times over praised Vonne’s musical output and notes that “The caliente combination of Latino rhythm and American rock & roll has been well explored by everyone from Doug Sahm to the Cruzados, yet Patricia Vonne’s…is more stylized, a feminine, sensual rendering. Romance and rock & roll rarely sound so good.”

Viva Bandolera represents both a labor of love and a completion. Sung entirely in Spanish, it is a summation in sorts of the distance Vonne has traveled on her singular path. Weaved throughout the tracks are several connoisseurs of the genre including Alex Ruiz, Tito Larriva, Michael Ramos, Rick del Castillo, Joe Reyes, and her brother.

“This album is special to me because I wanted it to capture my Latina heritage on one disk,” Vonne says. “It’s a big part of my identity and I feel I’ve accomplished what I set out to do. With this album I feel I’ve come full circle as an artist.”

The name of the album and her label, Bandolera Records, are allusions to the “independent spirit of women, and directly translates to “female bandit.” She says that at times she feels like an outlaw herself as a truly independent artist, and the role seems to suit her. After jumping through hoops to release her debut album through a label and having the deal fall through, Vonne formed her label and has released all of her records through the imprint to date. Her bandit mentality present in her music and operations made her the perfect fit as Dallas (aka the Zorro Girl) in 2014’s Sin City: A Dame to Kill For, which also found her trading in her guitar and castanets (also the name of her 2005 release) for much deadlier weapons.

Vonne’s rich and extensive family history is a common thread throughout the album. La Gitana de Triana (The Gypsy of Triana) tells the story of Vonne’s sister who decided to run away and become a gypsy dancer while in the old gypsy quarter of Triana. The song captures that passion for flamenco and the haunting magic of the city.  One of the final album tracks, Severina, was co-written with her brother in memory of the pair’s grandmother, Severina Rodriguez. The song pays tribute to the beloved woman and the indelible mark she left on her grandchildren.

One of the standout tracks amongst the 17 is Traeme Paz. As heard in the Robert Rodriguez film Once Upon A Time In Mexico, the track is a “blood drenched love song” that unfolds like a Spanish ballet. Mexicali de Chispa, co-written with her brother, features Vonne on lead guitar. It has the cinematic bravado and Latin surf-rock feel that has become synonymous with the director and his frequent creative partner, Quentin Tarantino. 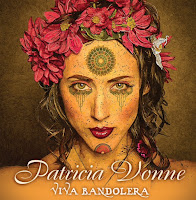 El Marinero y La Sirena was written while Vonne was on tour in Odense, Denmark, the hometown of Hans Christian Anderson. Vonne collaborated with fellow San Antonian Michael Martin on the nautical-themed animated video as well as the songwriting. The award winning video, shot and edited by Vonne, features Vonne and Martin’s original illustrations exploring the sailor’s “shipwrecked heart” and mermaid’s wounded cry of destiny leagues under the sea.

The short was featured at the SXSW Film Festival 2015 and won the Audience Award at the Cine Las Americas International Film Festival in 2015.

After visiting the museum of Spanish poet Federico Garcia Lorca, Vonne was inspired to write La Huerta de San Vicente and Fuente Vaqueros. Though Garcia Lorca died tragically during the Spanish Civil War, his spirit lives on through his art, with energy and spirit as palpable as Vonne’s own works. Other gems on the album include Mujeres Desaparecidas, which she wrote to bring awareness to the ongoing feminicide in Mexico and later donated the song to Amnesty International. The songs La Huerta de San Vicente (which was the John Lennon Songwriting Contest grand prize winner in 2009), Torera, Guitarras y Castañuelas  and Fiesta Sangria were all written while Vonne was in Spain, where her ancestors are from.

Vonne will be promoting her album with live CD release gigs in Houston, Austin and San Antonio. She is currently on a 32 date tour in Germany and will return for a European tour this summer in Germany, France, Austria and Italy.